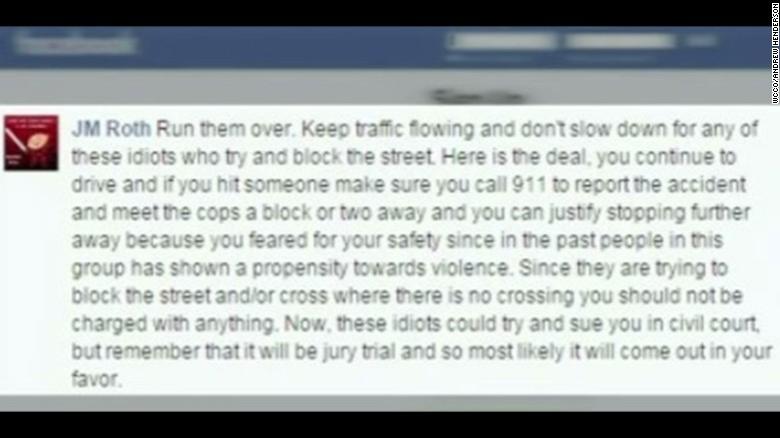 (CNN)Police in St. Paul, Minnesota, have put an officer on leave while investigators try to figure out if he's responsible for a Facebook post urging drivers to run over Black Lives Matter protesters on Martin Luther King Jr. Day -- and how to get away with it.

"Run them over. Keep traffic flowing and don't slow down for any of these idiots who try and block the streets," said the post attributed to RM Roth. "Since they are trying to block the street and/or cross where there is no crossing you should not be charged with anything."

Andrew Henderson saw the Facebook post early Saturday and brought it to the attention of police, CNN affiliate WCCO-TV reported.

"It's really concerning to me that someone would encourage violence on a day celebrating a man who taught peace," Henderson told the station.

The police department says it's investigating.

"The statement is offensive, disappointing, concerning and does not reflect in any way -- or align with -- the views, values and practices of the Saint Paul Police Department," a statement said. "If it is determined that the comment was written by a member of the Saint Paul Police Department, swift, strong and decisive disciplinary action will be taken."

"There is no room in the Saint Paul Police Department for employees who threaten members of the public. If the allegation is true, we will take the strongest possible action allowed under law," he said.

Investigators have not identified the officer, but police spokesman Steve Linders told CNN on Tuesday that the officer in question has more than 20 years of experience on the force. Identifying the officer would violate state statutes, he said.

"SPPD currently following up on initial complaint initially made by community member Andrew Henderson claiming an officer is behind the inappropriate Facebook post," Linders said in an email. "Mr. Henderson has approached the SPPD in the past with other concerns."