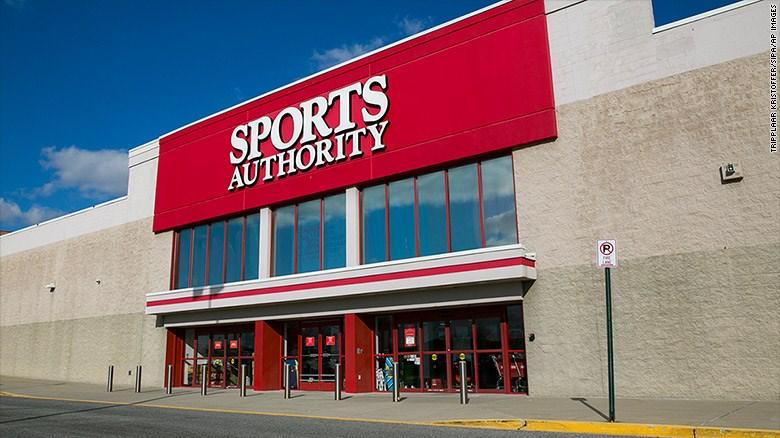 (CNNMoney) Sports Authority filed for bankruptcy early Wednesday and said it will close 140 stores, nearly a third of its total.

The bankruptcy has been looming since January, when the company disclosed that it had missed a $20 million debt payment.

The store closings will take place over the next three months. The stores to be closed have yet to be disclosed. The bankruptcy filing will allow it to break leases for money-losing stores.

The company has 14,500 full- and part-time employees at its 450 stores and its offices, according to the bankruptcy filing. Nearly two-thirds of those workers are part-time. It also disclosed more than $1 billion in liabilities and assets valued between $500,000 and $1 billion.

"In terms of their long-term viability, I think they need to do more than just close stores," said Andrew Bove, credit analyst with Standard & Poors. "There's other issues. They're not doing enough to get consumers in the door to spend money."

The company has arranged to borrow up to $595 million to fund its operations while in bankruptcy. But to pay off that loan and come out of bankruptcy, it likely will have to find a buyer for the remaining stores. That will be a challenge, Bove said, but not impossible.

"It's a well-known brand. They were the leader in the industry, so there is some value there," he said.

When the company was bought by a hedge fund 10 years ago, it was the largest sporting goods retailer. But it has struggled with the debt load associated with a leveraged buyout a decade ago. It has been overtaken by Dick's Sporting Goods (DKS), which has grown by providing a more high end shopping experience.

"Someone who wants to shop in a brick-and-mortar store and try on the baseball glove, or get the feel of a golf club, wants a better shopping experience," said Larry Perkins, of SierraConstellation Partners, an expert in retail reorganizations. "That's not Sports Authority any more."

Sports Authority is just the latest retail giant to fall on hard times as more and more shopping moves online.

Circuit City went bankrupt in 2008, followed by Borders in 2011. Both eventually closed. RadioShackwent bankrupt a year ago, and American Apparel (APPCQ) filed in October, although both companies remain in business with fewer stores.

Store closings are a growing trend among troubled retailers not in bankruptcy, such as Sears(SHLD). Even successful retailers such as Walmart (WMT) are closing stores.

For Sports Authority, the online competition has come from online retailers such as Amazon (AMZN,Tech30) and Fanatics, and also retail sites run by sports leagues such as the NFL and NBA.

"You used to go to Sports Authority or some other store to buy your fan gear. Now it's much easier to find online," said Perkins.

Sports Authority spends $6 million a year to have its name on the stadium that is home to the Denver Broncos, which just won the Super Bowl. Whether that 25-year naming rights deal will continue under the bankruptcy is unclear.

"This was a tough decision to make, but we believe it was a necessary step in our plan to make Sports Authority an even better partner for our customers," said CEO Michael Foss.

Correction: An earlier version of this story incorrectly stated the day of the filing and the amount of assets reported by Sports Authority.