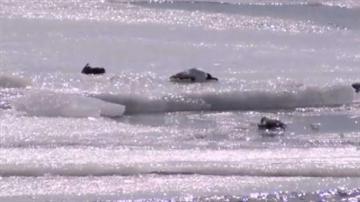 MILWAUKEE-- The department of Natural Resources reports there's been a recent spike in the amount of sightings of dead ducks along Lake Michigan and lagoons near Milwaukee's Lakefront.

\"It's definitely a lot more than we are used to,\" said Dianne Robinson, a Wildlife Biologist at the Department of Natural Resources.

The DNR reports the sightings are in sections all along Lake Michigan from Racine all the way to Sheboygan.

Robinson says these birds are expected to survive winter, but this winter proved to be more deadly.

\"The birds aren't necesarily used to something this cold, especially down here... it's sad to see them die,\" said Robinson.

The majority of the ducks have died from starvation, but others are hurting themselves when they land on ice. Robinson added, \"sometimes, ducks will land on the pavement thinking it's water and then they end up breaking bones.\"

The ducks are in varying stages of decomposition, which suggests they've been there for a while. That's why Robinson took a few samples to a DNR Laboratory in Madison on Wednesday.

\"We want to do a necropsy on them, open them up and see if we can tell how they died and in what stage their body was at that time. We also want to make sure there isn't something larger going on,\" added Robinson.