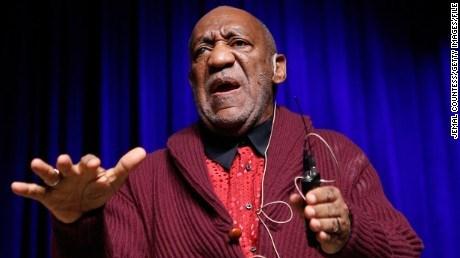 While the university did not cite a reason, the move comes one week after CNN obtained a copy of a decade-old deposition in which Cosby admitted he procured drugs to give to women he wanted to have sex with.

Cosby, 78, has been publicly accused of sexual assault by over two dozen women. Many have claimed the actor gave them drugs without their knowledge. He has never been criminally charged and has vehemently denied wrongdoing.

\"The William and Camille Olivia Hanks Cosby Endowed Professorship at Spelman College has been discontinued,\" the school's communications office said in a brief statement Saturday. It went on to say that \"related funds\" have been returned to the Clara Elizabeth Jackson Carter Foundation and that is has no further comment. That organization was established by Cosby's wife, Camille, and named for her mother.

Spelman College has a long association with Cosby. Two of Cosby's daughters, Erika and Evin, attended the institution. His late son, Ennis, graduated from Morehouse College, a prominent men's college connected with Spelman.

\"A Different World,\" the \"The Cosby Show\" spinoff that ran from 1987 to 1993, took place at a fictitious black school based loosely on Spelman and other schools. Some of the show's outdoor scenes were filmed there and producers visited the campus to speak with students about script ideas.

The professorship was funded through an endowment created in the late 1980s, when Bill and Camille Cosby donated $20 million dollars to Spelman. At the time, it was the largest individual donation ever made to an historically black college or university (HBCU).

It was not clear Saturday evening how much of that endowment went toward the professorship.

Spelman initially suspended the Cosby-endowed professorship in December 2014, when allegations against Cosby of rape were growing.

In a statement cited at the time by The Atlanta Journal-Constitution, a school spokeswoman said that the humanities professorship was established \"to bring positive attention and accomplished visiting scholars to Spelman College in order to enhance our intellectual, cultural and creative life.\"

The spokeswoman continued, \"The current context prevents us from continuing to meet these objectives fully. Consequently, we will suspend the program until such time that the original goals can again be met.\"

The deposition obtained by CNN earlier this month dates back to 2005 and 2006. In it, Cosby was questioned under oath by the attorney for Andrea Constand, who had accused the actor of rape.

While Cosby admitted during questioning that he acquired Quaaludes with the intent to give the sedatives to young women he wanted to have sex with, he did not admit to actually drugging any of his accusers.