Speaker of the House Holds Town Hall in Racine 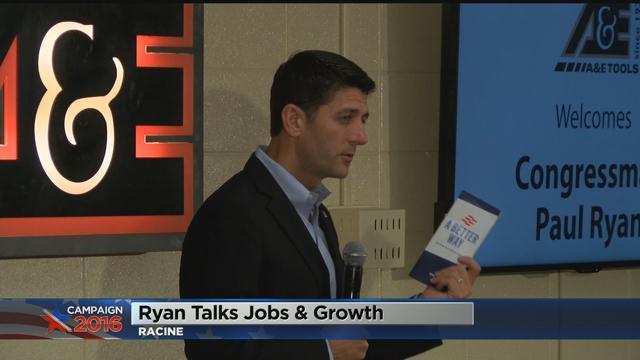 One day ahead of the Wisconsin primary, Congressman Paul Ryan campaigned in our area.

His race for re-election in Wisconsin's first district has drawn national attention after clashing with republican presidential nominee, Donald Trump.

In the final day before his primary contest, House Speaker Paul Ryan told voters today that he's all about helping the working class and keeping jobs in America.

Ryan spoke to a few dozen people at A&E manufacturing.

He says he wants keep manufacturing jobs in America by allowing every American business to write off all of their investments, including machines.

He, also, talked about higher wages, lowering healthcare premiums and getting more people out of poverty.

CBS 58 spoke with a voter who says he feels more confident in voting for Ryan, after hearing what he had to say.

"I know he can't do it alone. There is a lot of people that need to get involved in both parties. Democrats, republicans, they all have to work together. Hopefully they can and make America a whole lot better place,” Ryan said.