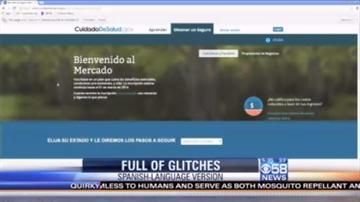 MILWAUKEE -- Spanish-speaking customers looking to apply for health benefits through healthcare.gov are reportedly having trouble understanding the Spanish on the website.

Nancy Flores, the statewide organizer for Voces de la Frontera, an immigrant rights group, said the barrier makes it harder for those who speak Spanish to sign up.

One noted example is the word \"prima\", which is commonly used to say \"female cousin\" in Spanish, but the website translates the word as \"premium\".

Flores says the broken language isn't the only problem with the website. She says many of the links that are supposed to lead to things in Spanish take people to the English version.

The problems have a political cost as well, Flores said.

\"Hispanics are kind of not seen as a priority constinuency,\" Flores said. Only around certain times, you know, elections.\"

Federal officials say they're working to make the website better.