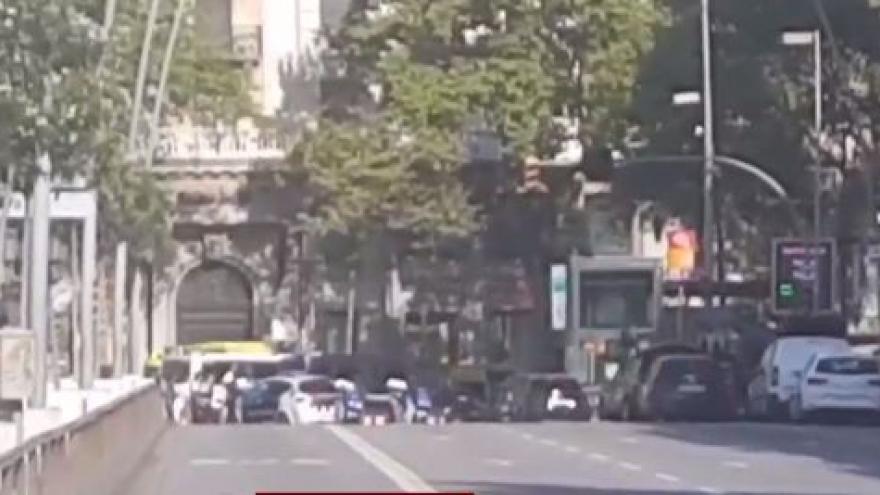 BARCELONA, Spain (AP) -- The Latest on the aftermath of the Spain attacks (all times local):

The Spanish newspaper La Vanguardia is reporting that the fugitive suspect in the Barcelona van attack has been captured.

Police have not confirmed that, but Catalan police say Monday afternoon that they are conducting an operation in the same area, a town 45 kilometers (28 miles) west of Barcelona.

Younes Abouyaaqoub, 22, has been the target of an international manhunt since Thursday's van attack in Barcelona. Authorities say they now have evidence he drove the van that plowed down the city's famed Las Ramblas promenade, killing 13 pedestrians and injuring more than 120 others.

Catalan regional police says they are investigating an incident in a town 45 kilometers (28 miles) west of Barcelona.

They say in a tweet Monday there is an ongoing police operation there.

Spain's interior minister is meeting with representatives of almost all political parties to brief them about the investigation into the deadly attacks that killed 15 people in Catalonia last week.

It was the first time the anti-terror group has met since the deadly attacks in the French city of Nice last year. The governing Popular Party and the main opposition Socialists set up the group in 2015.

Lawmakers of all other parliamentary parties are attending the meeting in Madrid, either as participants or as observers, except for a coalition of Basque nationalist parties who have criticized the government's anti-terrorism policies.

Interior Minister Juan Ignacio Zoido was expected to explain the decision to not upgrade the country's terrorism alert level after the attacks in Barcelona and a nearby coastal town.

Police have cordoned off the main memorial site of the Barcelona attacks in Las Ramblas after reports of a suspicious package on a bus.

Authorities later said it was a false alarm, saying someone had left behind a backpack with personal belongings. Police said the cordon would soon be lifted. But the security incident was a sign that authorities were still on high alert in the city as a manhunt for one of the attackers continues.

Police had formed a line Monday morning preventing the crowds of mourners and visitors from getting near the site where people have placed hundreds of flowers and candles in memory of the victims of the attacks in Barcelona and Cambrils. A total of 15 people were killed and more than 120 others injured.

An official in Spain says that authorities have identified all 15 victims killed in the attacks last week in the Catalonia region.

Mundo spoke during a news conference in which officials also increased the death toll in the attacks to 15 -- the latest victim being a man, Pau Perez, found stabbed in a car that was believed to be used by one of the attackers to flee the scene.

The previous death toll was 14 -- 13 people killed in a van attack on Barcelona's Las Ramblas promenade on Thursday, and one woman killed hours later in Cambrils.

A regional official in Spain says that the death toll in the attacks last week in Barcelona and a coastal town south of the city has risen to 15.

Catalan interior minister Joaquim Forn gave the updated figure in a news conference. He said that the new victim is a man found stabbed in a car. The car was believed to be used by one of the attackers to flee the scene.

The previous death toll was 14 -- 13 people killed in a van attack on Barcelona's Las Ramblas promenade on Thursday, and one woman killed hours later in Cambrils.

Mourners have wept and hugged each other as they visited the main memorial site of the Barcelona attack while the city tries to get back to normal with the beginning of a new work week.

Crowds of people have continued to lay flowers, candles and heart-shaped balloons at the top of city's iconic Las Ramblas promenade where a van plowed into pedestrians, killing 13 and injuring more than 120 on Thursday. Hours later, one person was killed and several more injured when a car ran into a busy boardwalk in the nearby seaside resort of Cambrils.

Other smaller flower and candle tributes are located at different points of Las Ramblas along where the van drove.

Meanwhile, the promenade regained a semblance of normality.

Spanish newspaper El Pais has published images of what it says is the driver of the van attack supposedly making a getaway on foot after plowing through scores of people on Barcelona's iconic Las Ramblas promenade.

Catalan authorities have confirmed on Monday that the van driver was Younes Abouyaaqoub, and that he is the last of the 12-man Islamic extremist cell to remain at large.

Thursday's van attack and a subsequent car attack in a nearby town hours later killed 14 people and injured more than 120 others.

Authorities in Spain have confirmed that Younes Abouyaaqoub is the final member of the Islamic extremist cell at large after the attacks in Barcelona and a nearby town. They also believe he is likely the driver of the van attack that killed 13 and injured scores more in Barcelona.

Catalan interior minister Joaquim Forn has told Catalunya Radio on Monday that "everything indicates" that Abouyaaqoub, a 22-year-old Moroccan and resident of the northern town of Ripoll, was the van driver.

Forn also confirmed that Abouyaaqoub is the remaining member of the 12-man cell that remains at large. Another attack in Cambrils killed one other person.

A Sydney school is mourning the loss of a 7-year-old student who was killed when a van plowed into pedestrians in Barcelona.

Julian Cadman, a dual citizen of Australia and Britain, was enjoying the sights of Barcelona with his mother when a van sped down Las Ramblas promenade last week targeting pedestrians. His mother was injured in the attack and was hospitalized.

Greg Whitby, executive director of the Catholic Education Diocese of Parramatta, said in a statement Monday that Cadman had been a beloved second grade student at St. Bernadette's Catholic Primary school in Lalor Park, a western Sydney suburb.

Spanish police are continuing the search for the man who they consider to be the final member of a cell that carried out vehicle attacks in Barcelona and a nearby town that killed 14 and injured more than 120 others.

Police are searching Monday throughout the northeastern region bordering France. Police have declined to identify who they are looking for, but local media reports say he is Younes Abouyaaquoub, a 22-year-old Moroccan. He is suspected of driving the van that plowed down the Las Ramblas promenade Thursday, killing 13 people and injuring 120.

Another attack hours later killed one person and injured others in Cambrils, a seaside town south of the city. Police say the cell consisted of 12 men, all with connections to the northern town of Ripoll.

A Catalan official says regional and local authorities discarded the Spanish government's suggestion to place traffic barriers to protect the Las Ramblas promenade because they deemed them "inefficient."

Catalan regional president Carles Puigdemont told La Sexta television that regional and municipal authorities discarded the suggestion because the barriers wouldn't have prevented vehicles from entering the promenade at other points. Besides that, Puigdemont said closing off Las Ramblas was impractical because emergency vehicles still would need to be able to access the area.

Reports say the suggestion was made after other big vehicle attacks in Europe, but the precise timing wasn't clear.

On Thursday, an attacker drove a van down the promenade, killing 13 and injuring scores more. A subsequent attack in nearby town killed another person.