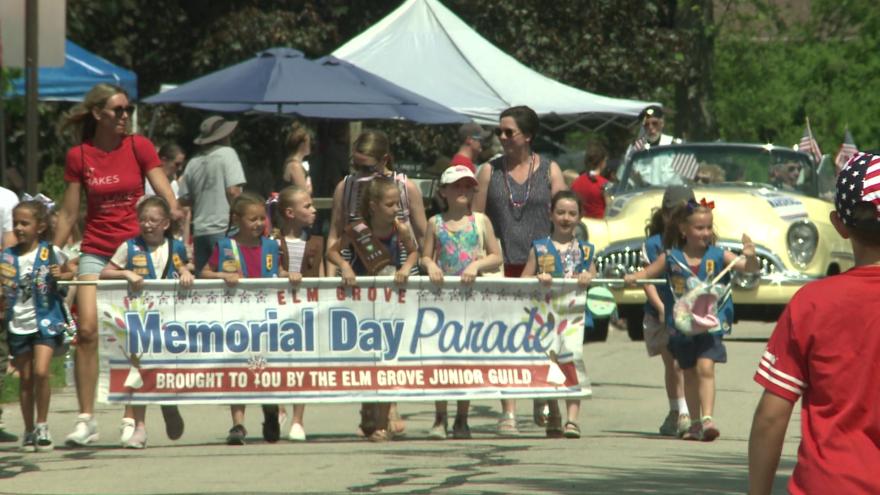 In Elm Grove, people enjoyed the summer-like sun and heat to salute America's military men and women. Some of those veterans were in the crowd, applauding the parade.

"Just remembering my friends and brothers that I served with in Iraq, I was in Iraq for two years. Just another day to get a chance to remember our friends," said Sean Frye, army veteran.

Elm Grove's parade dates back to 1947, when the local legion marched to a church for a flag ceremony.

In Franklin, Linda Pfeiffer from the American Legion pointed to a continuing problem for veterans. She spoke before a memorial day ceremony and offered a message for veterans who are hurting or struggling.

"There's been too many that have been gone this year, especially to suicide. We've lost 18 people in the Milwaukee area to suicide this past year," Pfeiffer said. "All they have to do is call one of us and we will help them and we have places that we can send them out to the VA Medical Center, or just talk to us and we will help you through it. That's what we're here for."

Forest Home Cemetery in Milwaukee had their own ceremony to honor the fallen troops. While some people laid wreathes on the graves of people they knew, many wanted to also honor the ones they did not know to show they are recognized.

"We don't know how they died. We just know that they have died and there is someone to be memorialized and to be recognized."

The tribute in Franklin was followed by a flag retirement ceremony at the local VFW post.

We met Captain Ron Lampe there. He's a veteran of the Vietnam War and a retired New Berlin firefighter captain. Lampe said Memorial Day is one of his favorites because so many people can come and honor the veterans.

"The thing that astounds me is you take a look at this cemetery and you see all the American flags, and all these people have served in the military...each one of these flags, and you don't really realize when you see a cemetery how many are buried here until you see all the flags on a day like today," Lampe said.

Lampe said he is a very devoted veteran these days. When he isn't attending to his honor guard duties, Lampe travels the country in his mobile home after he sold his house more than 20 years ago.