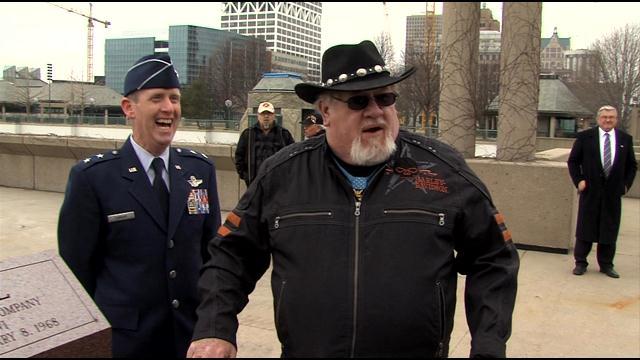 U.S. Army Private First Class Gary George Wetzel now has a special marker at the War Memorial reminding anyone who stops to gaze upon the stone of his heroics back in 1968.

Wetzel re-enlisted for another tour in Vietnam and was shot down for the fifth time.

He lost an arm but stuffed the limb into his fatigues and continued to engage the enemy, clearing a landing strip for his brothers in arms.

The 67 year old Medal of Honor Recipient was there with his 91 year old mother for the special unveiling.

A section of Mason Street near the War Memorial Center has also been renamed the Gary G Wetzel Medal of Honor Way.

Wetzel said the honor doesn't just belong to him.

\"I should have been dead,\" recalled Wetzel. \"It wasn't my time. Maybe it was time to be alive today for this very special tribute. I'm very honored we look at this sign, Gary G Wetzel Medal of Honor Way, but it's really our way.\"

Wetzel was a door gunner for the 173rd Assault Helicopter Company when his helicopter was shot down in Vietnam on January 8, 1968. During the ensuing fight, Wetzel's left arm was badly damaged and he received serious injuries to his right arm, chest, and left leg. Despite the life-threatening injuries, Wetzel continued fighting and helped hold off the enemy until they could be rescued. His heroic actions were credited with saving numerous lives. Because of the injuries he received, Wetzel's left arm was amputated. He was awarded the Medal of Honor from President Lyndon Johnson on November 19, 1968.

\"I could not be more proud to recognize Gary, he is a hero in the truest sense of the word. Not only did he save numerous lives in Vietnam, he has spent the past few years doing volunteer work to brighten the lives of people across our community,\" said County Executive Chris Abele. \"I know Gary joins me in saying this honor is as much for all the brave men and women who put their lives in harm's way to protect us as it is for him.\"