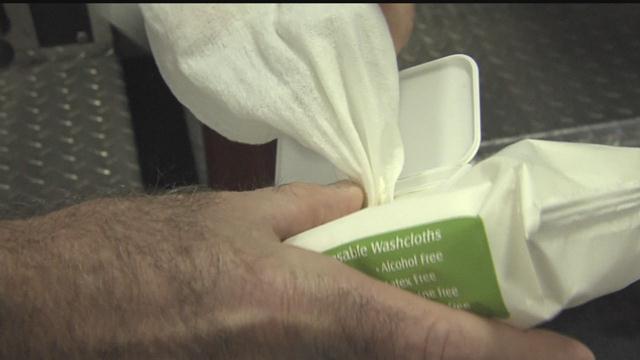 Everyday, firefighters risk their lives to save others, not thinking twice about the effects it can have on them long after the flames are out.

\"It's scary to know that some day, someone might show up to the doctor's office with a symptom they think it is totally unrelated and be diagnosed with cancer,\" said South Milwaukee Fire Chief Joseph Knitter.

Mark Bourdeau is the Wisconsin director of the Firefighter Cancer Support Network.

Reducing exposure is key, so Knitter has issued a directive to his crew to use disposable adult wipes. They've been added to all of the department's fire trucks, so crews can do what's called a gross de-con.

\"Having them take large particles of smoke and soot, whatever they can and clean it off at the scene, throw it away at the scene and not drag that stuff back in the fire engines and ladder trucks,\" said Knitter.

Stored inside coolers, the wipes are a recommendation by the Firefighter Cancer Support Network.

\"You never know when it could ,\" Bourdeau said. \"Cancer doesn't discriminate. It doesn't pick and choose. You never know it's going to happen to you or somebody you know.\"

Each South Milwaukee firefighter also has two protective hoods, that way, they don't have to wear one soiled in soot. It's also a requirement to keep gear and helmets clean too.

\"I have a lot of young firefighters here with bright futures,\" Knitter said. \"I want them to be able to enjoy not only their careers, but their families as well.\"

The adult wipes were funded through the department's safety budget. Chief Knitter isn't aware of any other area departments using them to reduce firefighters risk of cancer.