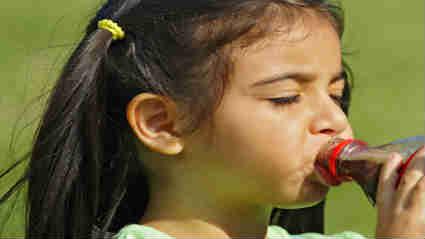 Girls who consume a lot of sugary drinks may enter puberty earlier than girls who don't, Harvard researchers report.

Among nearly 5,600 girls aged 9 to 14 who were followed between 1996 and 2001, the researchers found that those who drank more than 1.5 servings of sugary drinks a day had their first period 2.7 months earlier than those who drank two or fewer of these drinks a week.

This finding was independent of the girls' body mass index (a height-weight ratio that measures body fat), how much food they ate, or whether they exercised or not, the researchers noted.

\"Starting periods early is a risk factor for depression during adolescence and breast cancer during adulthood. Thus, our findings have implications beyond just starting menstruation early,\" said study first author Jenny Carwile, a postdoctoral associate at the Harvard School of Public Health, in Boston.

The researchers found that the average age at the first period among girls who consumed the most sugary drinks was 12.8 years, compared with 13 years for those drinking the least.

The reasons why sugary drinks might bring on menstruation early are not clear, she said. \"We think it may have to do with the effects of consuming a highly sugared food,\" Carwile said.

Carwile explained that the girls filled out a detailed questionnaire each year about what they ate. From this data, researchers were able to isolate how much sugar girls got from drinks apart from the sugar they consumed in other foods.

Sugary drinks containing sucrose, glucose or corn syrup have already been linked to weight gain, and this new study shows another negative side effect of these drinks, Carwile said.

The report was published online Jan. 28 in the journal Human Reproduction.

Senior study author Karin Michels, an associate professor in the department of obstetrics, gynecology and reproductive biology at Harvard Medical School, called the study \"another reason to cut down on these beverages that have sugar added to them.\"

Such beverages include sodas, sweetened fruit drinks and sweetened teas.

Carwile noted that diet sodas and fruit juices were not associated with any difference in the age at which girls started their periods.

Michels cautioned that this study cannot prove directly that sugar-sweetened drinks are the cause of earlier menstruation. \"We are showing an association,\" she said. \"We can only do some guesswork on the mechanisms.\"

She said that drinks with added sugar have a higher glycemic index than naturally sweetened drinks such as fruit juices. High-glycemic foods cause a rapid increase in insulin concentrations in the body. This can cause higher concentrations of sex hormones, which have been linked to starting periods earlier.

That lack of a cause-and-effect finding was among several concerns with the study cited by the American Beverage Association.

\"Neither this study nor the body of science shows that sugar-sweetened beverage consumption causes early onset of menarche [first period]. What the body of science supports is that adolescent girls are reaching puberty earlier than prior generations; however, there is no scientific consensus concerning the cause of this trend,\" the association said in a statement.

Samantha Heller, a senior clinical nutritionist at New York University Langone Medical Center in New York City, said, \"Sugar-sweetened drinks, such as sodas, have no nutritional value. One may wonder what nutrients -- such as vitamins, minerals and protein -- are being replaced by these drinks that can lead to this metabolic problem,\" she added.

\"Whatever the reasons for the earlier start of periods, there is no good reason for anyone to be drinking sugar-sweetened drinks or sodas regular