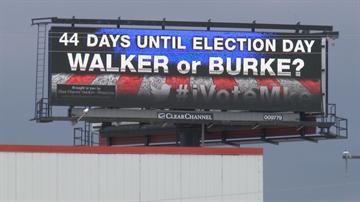 MILWAUKEE -- As the race for Wisconsin governor heats up, it's only fitting there be two sides to this issue.

\"We need to be part of the process,\" one voter said.

\"I wouldn't post necessarily who I would vote for,\" another replied.

It's an argument sparked by billboards popping up around Milwaukee.  Digital ads, calling on voters to tweet their choice in the governor's race.  Voter Carol Dorau thinks the billboards are a great idea.

\"By not using all the media, you're leaving out a large percentage of the voting public, the younger voters,\" Dorau said.  \"Or people like me who really like media.\"

Not everyone who's tweeting agrees.  Twitter user @alanofgabe said: \"There was a time when our voting choice was personal and we didn't share it.  Can we get back to that #ivotemke?\"  Dorau calls that mentality old fashioned.

\"You have to move with the times, you can't stay frozen about your political ideas because of nostalgia,\" Dorau said.  \"That goes nowhere.\"

Governor Walker's son, Matthew, as well as the left-leaning Keep Wisconsin Blue camp have embraced the idea.  Adam Groose doesn't like to share who he votes for, but isn't against others doing it.

\"If someone else wants to post about it, I'm not going to sit there and argue with them if I think they're wrong or whatever,\" Groose said.

Some voters worry the ads, paid for by Clear Channel Milwaukee, will give free advertising to candidates.  But as the signs alternate, so do the messages, producing even representation for both Walker and the challenger Mary Burke.

\"If they're just saying they're voting for somebody, I don't really know how that's going to change somebody else's mind,\" Groose said.

\"If it's a person who wants to be educated and make a more educated vote, they'd have to go further than a billboard, I would hope,\" Dorau said.