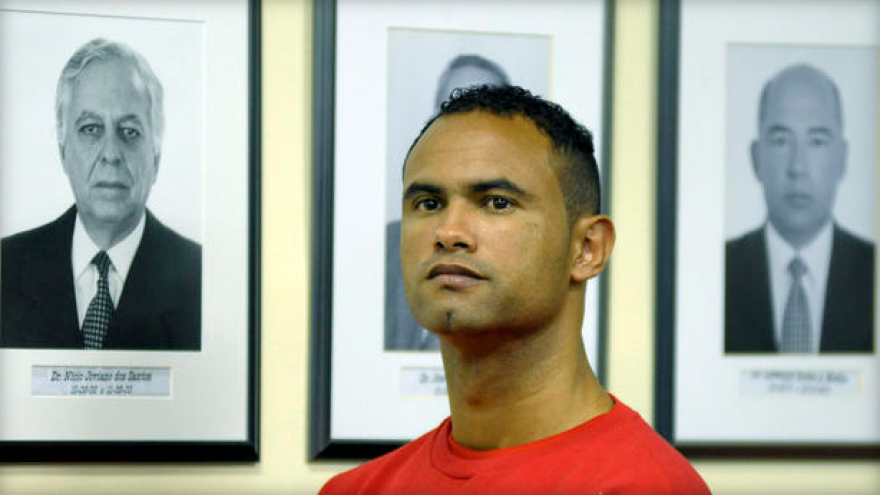 RIO DE JANEIRO -- (CBS NEWS) A Brazilian soccer club on Tuesday presented its newest member, a goalie convicted in the killing of an ex-girlfriend in which he fed her corpse to his dogs. The signing has prompted outrage in Brazil and promises by sponsors to drop out.

Souza was convicted by a lower court in 2013 after a trial and police reports that included horrific accounts of how Samudio died: She was strangled, her body was cut up and pieces were fed to dogs.

The model went missing after she sued the goalie for child support in a public dispute that damaged Souza’s image at the height of his fame. Souza, who was married, denied the child was his; DNA tests later proved he was the father.

Ultimately, Souza, two men and an ex-girlfriend of Souza were convicted in the killing.

Souza was recently released from prison while he appeals a 22-year sentence in the 2010 killing of a former girlfriend, Eliza Samudio. A Supreme Court justice ordered his release on the grounds that his appeal to a higher court was languishing.

In a news conference transmitted by ESPN Brazil Tuesday, Souza said he was thankful for the opportunity and had been preparing himself for years to return to play.

“People run from me because of what happened in the past,” said Souza, wearing a team shirt. “Boa is opening the doors (for me). I’m very happy, motivated.”

At least five sponsors have said they’ll drop the team in protest. The city of Varginha, about 250 miles northwest of Rio de Janeiro, also said it was looking into whether it was legally possible to break with the team, which uses its facilities.

In a Facebook post, club president Rone Moraes da Costa defended the decision, saying all laws had been followed and that the second-division club was doing its part to help a man recover.

“Who has never heard (it said) that work dignifies a man?” he wrote.

Many Brazilians, from Esporte fans to women’s groups, strongly disagreed, and thousands of angry comments were posted on the team’s Facebook page.

“I will cheer on Boa Esporte if the team plays terribly in every game,” wrote Rodrigo Marcos Costa below the club president’s message. “A team that hires a killer doesn’t deserve anybody’s respect.”

Nearly five in 100,000 women are killed each year in Brazil, giving the country one of the world’s highest homicide rates for women.

Boa Esporte signed Souza to a two-year deal. He could return to prison if the higher court rejects the appeal.

Messages left with Souza’s lawyer were not immediately returned.