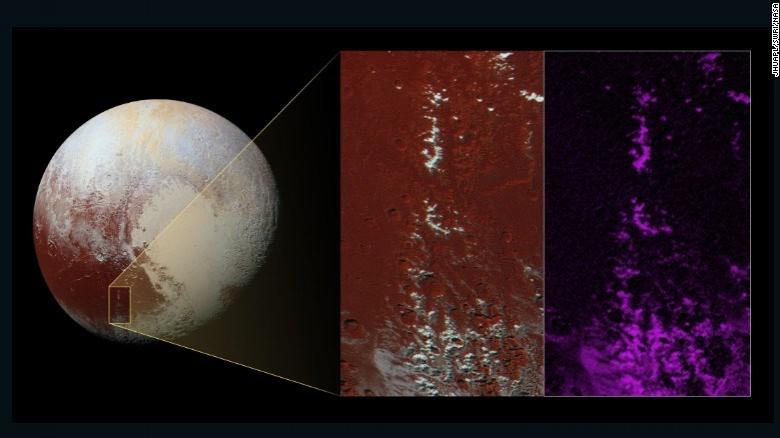 (CNN)One of Pluto's most recognizable features may be covered in snow.

These snow-covered peaks are in the Cthulhu range, which stretches halfway around the dwarf planet's equator at more than 1,800 miles -- a bit larger than the state of Alaska.

This mountain range stretches for 260 miles, and the upper slopes of the highest peaks are coated with bright material, which stands out against the deep red color of the plain. Examination of images captured by New Horizon's historic flyby in July 2015 suggest the bright material is mostly made of methane ice.

"That this material coats only the upper slopes of the peaks suggests methane ice may act like water in Earth's atmosphere, condensing as frost at high altitude," said John Stansberry, a New Horizon science team member from Space Telescope Science Institute of Baltimore.

Cthulhu's terrain is vast and varied, dotted with mountains, craters and fractures in some parts and smooth in other areas. It is distinguishable because of its dark surface, which scientists believe is caused by it being covered by methane that is exposed to sunlight.

We learned about snow on Pluto shortly after New Horizon's flyby. However, scientists were not sure initially if Pluto's snow was comprised of nitrogen, carbon monoxide, methane or a combination of all three.

Since New Horizon's flyby, scientists have learned about a number of marvels on the dwarf planet, ranging from floating hills to potential ice volcanoes.