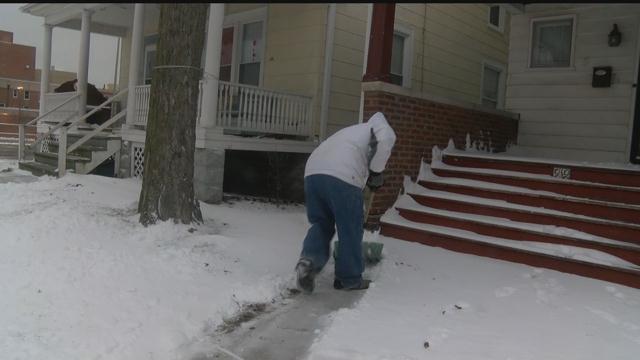 The latest round of winter weather may have been felt most in Kenosha.

Folks there have been using shovels and snowblowers to clear the snow.

The snow has been on and off all morning long.

But it's not the snow people are talking about your Kenosha it's the wind.

As Waves from Lake Michigan explode on to the shoreline of Kenosha the howl of the wind could easily be heard.

Inland the sound of snowblowers and shovels echoed through neighborhoods.

Robert Newell Snow plowed sidewalks in front of his and for other homes in his neighborhood. While he says he was expecting more snow the conditions are still pretty tough.

"I pretty much take care of my house and my neighbors house I don't have much to work with as it is," said Newell.

Kenosha's 2 inch ordinance also went into affect. Plows were out since late last night and by 930 this morning most residential streets had been hit at least once.

While this is not the way they wanted to welcome the month of March.

For those clearing the snow by hand they know things will change soon.

We have seen it plow was throughout the city of Kenosha laying down salt. We also have not heard of any major accidents in Kenosha.