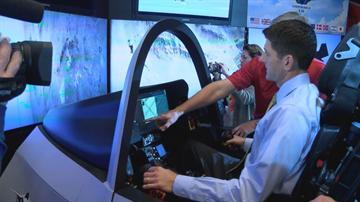 The company welcomed Congressman Paul Ryan and executives from Lockheed Martin to show off its role in the military's newest fighter jet, the  F-35.

\"It is driven by an aging fighter force and changing threat environment  that, in the near future, will make today's fourth generation aircraft  largely obsolete,\" Lockheed Martin's Gary Hintz said.

The F-35 will replace the F-16 and F-18s, which date back to the 1980s.  Snap-on makes the tools and kits that help build and maintain the versatile stealth jet.

\"Snap-on, for years, has been about solving problems where there's no room for failure,\" Chairman and CEO Nick Pinchuk said. \"That's really where Snap-on really makes the big  difference and there's no place that's more critical than the F-35.\"

But rolling out more than 2,400 new planes has had its challenges.  A  \"60 Minutes\" report in February noted the program is seven years behind  schedule and over budget.  Lockheed Martin reps say today's planes cost half as much as the initial designs.

\"F-35 program is on track and is gaining momentum,\" Hintz said.

The aircraft's introduction also comes as President Obama has proposed major cuts to all branches of the military.

\"The question is, do we hollow out the military, like the president is proposing,\" Congressman Ryan said.  \"Or do we draw the line somewhere to make sure that the men and women that put on the uniform and fight for us have the equipment that they need and that the American military is a step ahead of everybody else in the world.\"

Snap-on leaders remain confident they'll still have a job to do.

\"Of course it's a concern and a headwind for us,\" Pinchuk said.  \"If you're a businessman like me you just have to use your energy to figure out new ways to use the energy and people to find new business.\"

Lockheed Martin delivered 35 planes in 2013.  The company expects to produce even more this year.
Share this article: