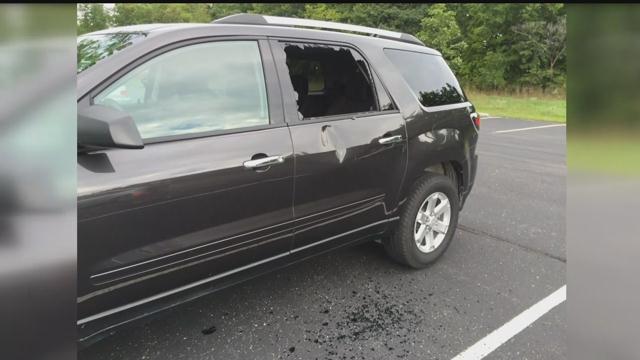 Brazen thieves in Washington County: authorities say on Sunday at least 10 vehicles had their windows smashed while the owners were just a few feet away, watching their kids play sports.

When you look at these pictures, you see just a glimpse of the damage done to vehicles at the Heritage Trails County Park in the town of Polk on Sunday afternoon.

The Washington County Sheriff's Office says they were called out to the park around 3:00PM after a youth soccer game.

They found six SUV's, all with at least one window shattered and items stolen, ranging from purses to cash, credit cards and electronics. The parents we spoke with wouldn't go on camera, but say, between the vehicles, about $17,000 of valuables were stolen from this parking lot, full of cars, just feet from where the families were watching their kids.

But officials believe it started a few hours earlier.

"Yeah, this is a very bold move," said Lt. Jim Theep, with Germantown police. He says in his town, the break ins started between11:30AM-1PM at the FC National Soccer fields.

Same story; all with their windows smashed in and valuables taken. A short time later a car was hit at Kennedy Middle School where a softball and soccer match were going on.

While there is nothing yet that ties all these crimes together, authorities believe it may be the same people.

"The coincidence is very high that it could be the same thing," Theep said.

Some parents believe its people who frequent these fields, as they knew where and when they'd be busy. While authorities search for the criminals they have a reminder for the public:

"Make sure you keep your valuables with you or not have them in plain view where someone can see them and be tempted to take them from your vehicle," said Theep.

Authorities have no real leads on any of the suspects, just that in Germantown, a rusty car was seen leaving both parking lots. In Polk, witnesses say they saw a dark colored vehicle with two black men inside.