Slide the City permit not yet approved; organizers still confident event will happen 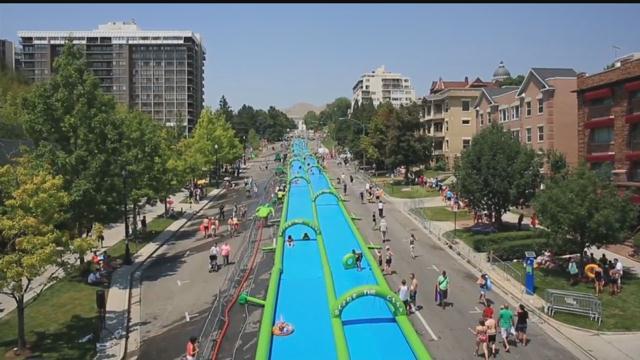 On Saturday morning, cars won't be going over the hill on Highland Avenue between 6th and 10th streets in downtown Milwaukee.

\"It's for people to get out and have a good time in the sun,\" said director Scott Ward.

But the city of Milwaukee said, not so fast. The water attraction permit hasn't even been approved yet.

\"If he wants to pull this off he needs to have all the proper safe guards in place,\" said Todd Weiler with the Department of Neighborhood Services.

Weiler is specifically talking about a protective fence and port-a-potties. He said Slide the City has yet to show proof, even with a contract, it has met the necessary requirements.

\"The ball's in his court,\" Weiler said, referring to Ward.

But Ward said that's not a problem.

\"We have port-a-potties and fencing, that's no issue,\" he said by phone Thursday evening. \"We have to have an inspection, a physical inspection of the slide.\"

Signs are up to restrict parking and barricades are nearby to block off the road. Ward said set up takes six hours, so they'll start in the wee hours of Saturday morning. Once they're done, it'll then be up to city inspectors to give the all clear.

\"Most likely this could come down to the wire,\" Weiler said.

\"Every city's different. It's very common for a permit not to be issued until the morning of an event,\" said Ward. \"Of course, this event is going to happen.\"

You can still register for Slide the City online, or do so on-site Saturday morning. The event runs from 10 a.m. to 7 p.m. in downtown Milwaukee.