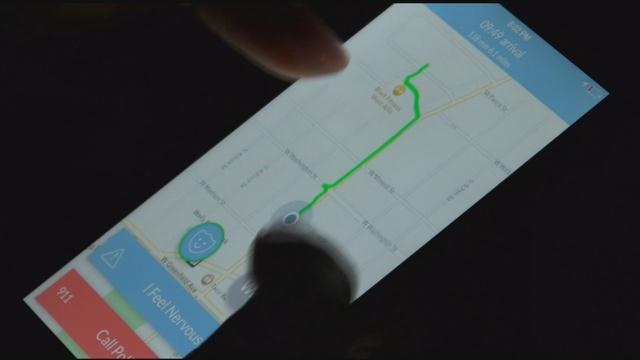 One week ago, Susan Gartell moved from the south side into her new home in Riverwest.

But that sense of security is already gone.

\"I actually walked home at night on Sunday,\" she said. \"So that's upsetting.\"

She's talking about two people who were robbed at gunpoint in her neighborhood Sunday night.

Police say multiple suspects demanded a 21-year-old woman's belongings in the 1000 block of E. Townsend around 9 p.m. Ten minutes later, around the corner in the 3400 block of N. Weil, they targeted a 37-year-old man.

\"The walking alone at night, that won't happen again,\" said Gartell. \"After hearing that, it's not a risk I think is worth it anymore.\"

If you have to walk at night alone, consider using a new app called Companion. It tracks your location with GPS so friends can virtually follow you. You can let them know if you feel nervous, or if you're in danger, you can call police.

The app also alerts friends if you stop moving or change your route. Users must respond to an alert that they're okay, otherwise, friends will be notified to check on them. The app works with anyone, even if they don't have it installed.

Gartell said it's a good tool for everyone to have, but changing social disparities are the root preventing crime.

\"This is a symptom of a big problem, I think, so we really need to address those things in our community,\" she said.

The suspects are between 14 and 16 years old. Investigators are looking into whether the six young defendants may be linked to similar crimes.