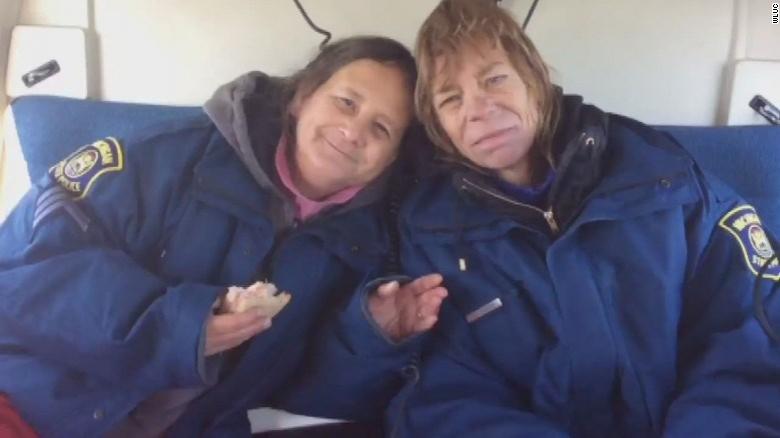 (CNN)Snacks and a shiny SUV windshield saved two sisters who were stranded for almost two weeks in Michigan's Upper Peninsula.

Leslie Roy, 52, and Lee Wright, 56, were returning to Kalamazoo from visiting a relative, when their truck got stuck in snow on a remote road in northern Luce County along Lake Superior.

The sisters survived for 13 days on eight boxes of Girl Scout cookies, some cheese puffs and snow for water.

Their 2010 white Ford Explorer was spotted Friday by a Michigan State Police helicopter after the pilots noticed a glimmer off of the car windshield.

The helicopter circled several times before finding the vehicle under trees. The sisters -- one of whom is from Nebraska and the other from Oklahoma -- then got out of the car and started waving and building a signal fire.

Roy and Wright were finally rescued after the helicopter landed on a beach a few miles away and authorities hiked to them.

When rescuers arrived the sisters were elated and Lee Wright was clutching her Bible.

Michigan State Police say they had on multiple layers of clothes and were rationing their food. They had huddled in their car to stay out of the cold, but the battery eventually died.

The sisters did say they heard rustling and were approached by a bear on two occasions, but told State Police they knew it wasn't help because \"rescuers would have flashlights.\"