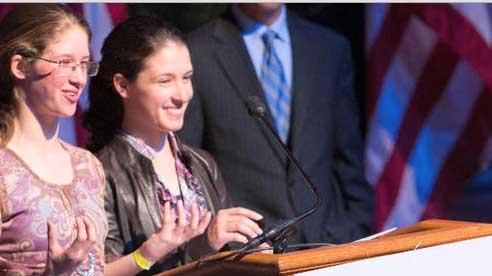 (CBS NEWS)Ten years ago, 10-year-old Rachel Okun and her sister Kelsi, 8, told their parents they had a big idea -- they wanted to say thank you to the troops in Iraq and Afghanistan by offering scholarships to their spouses and children.

With some parental assistance, the precocious girls created their own charity called ThanksUSA, and soon they were online asking for money.

In 2009, when CBS News paid a visit, ThanksUSA had raised a stunning $5 million.

"I've been able to see that really any person can make a difference. And what you give out to the world you get back 10 times," Rachel said.

Now, Rachel is in college, Kelsi is a high school senior, and ThanksUSA is still going strong.

From an idea that began in a dinner table conversation, $10.3 was raised through individual and corporate donations, golf and tennis tournaments, and an annual treasure hunt.

So far, ThanksUSA has given military family members more than 3,400 scholarships of $3,000 each.

With the help of ThanksUSA, Kelly Estep will soon get her bachelor's degree and then plans to get a master's in social work. Her husband was killed in Iraq in 2005.

"With my experience, I want to flip that into something positive. And give back to the military. And be there for other families that lose a loved one, son or daughter, husband, wife," Estep said.

"You can change the world," Rachel said.

"One heart at a time," Kelsi added to the message that is true today as it was 10 years ago when ThanksUSA was born.