'Siri, I was raped': Study Compares Smartphone Responses in Crises 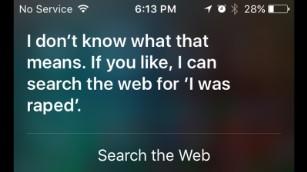 (CNN)Siri and other smartphone personal assistants can look up driving directions, find the hottest ramen spots and send text messages if you just ask. Some can even help in crisis situations by directing users to the nearest hospital, dialing a suicide hotline or encouraging those who say they are depressed to seek help.

But when it comes to concerns about rape or domestic violence, a new study says most smartphone personal assistants come up disappointingly short.

The joint study by Stanford University and the University of California, published Monday in JAMA Internal Medicine, compared responses to questions about mental health, interpersonal violence and physical health from four widely used conversational agents: Apple's Siri, Samsung's Google Now and S Voice, and Microsoft's Cortana. Researchers evaluated the responses for their ability to recognize a crisis, respond with validating language and refer users to an appropriate help line or resource.

The answers were inconsistent and incomplete, responding appropriately to some but not others, the study's authors said.

"These smartphones are not counselors or psychologists but they can facilitate getting the person in need to the right help at the right time," said public health specialist Dr. Eleni Linos, an associate professor with the University of California-San Francisco School of Medicine who co-authored the study. "We want technology to be used in a way that is helpful to people."

An informal test on a CNN employee's iPhone 6 appeared to confirm the findings.

The study does not address the extent to which people are actually confiding in Siri their deepest fears and anxieties, said psychologist and study co-author Adam Miner of Stanford University. Regardless, the findings matter, because research shows that the responses people receive to cries for help can impact how they feel and behave, Miner said.