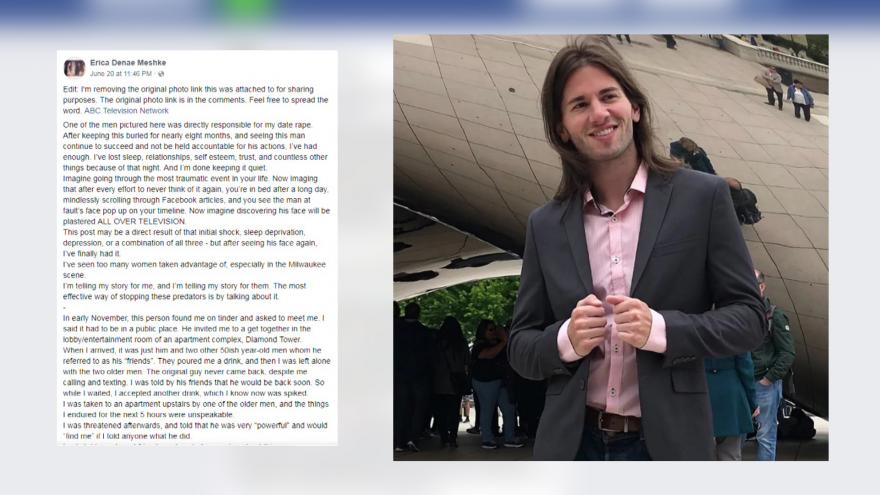 MILWAUKEE (CBS 58) -- The second episode of ABC's new show "The Proposal" was expected to air on Monday and feature Milwaukee contestant Michael Friday.

Now, ABC says they are canceling that episode after sexual assault allegations against Friday were posted on social media.

Erica Meshke, turned to Facebook Thursday after learning Michael Friday was going to appear on the next episode. The post starts with, "One of the men pictured here was directly responsible for my date rape." 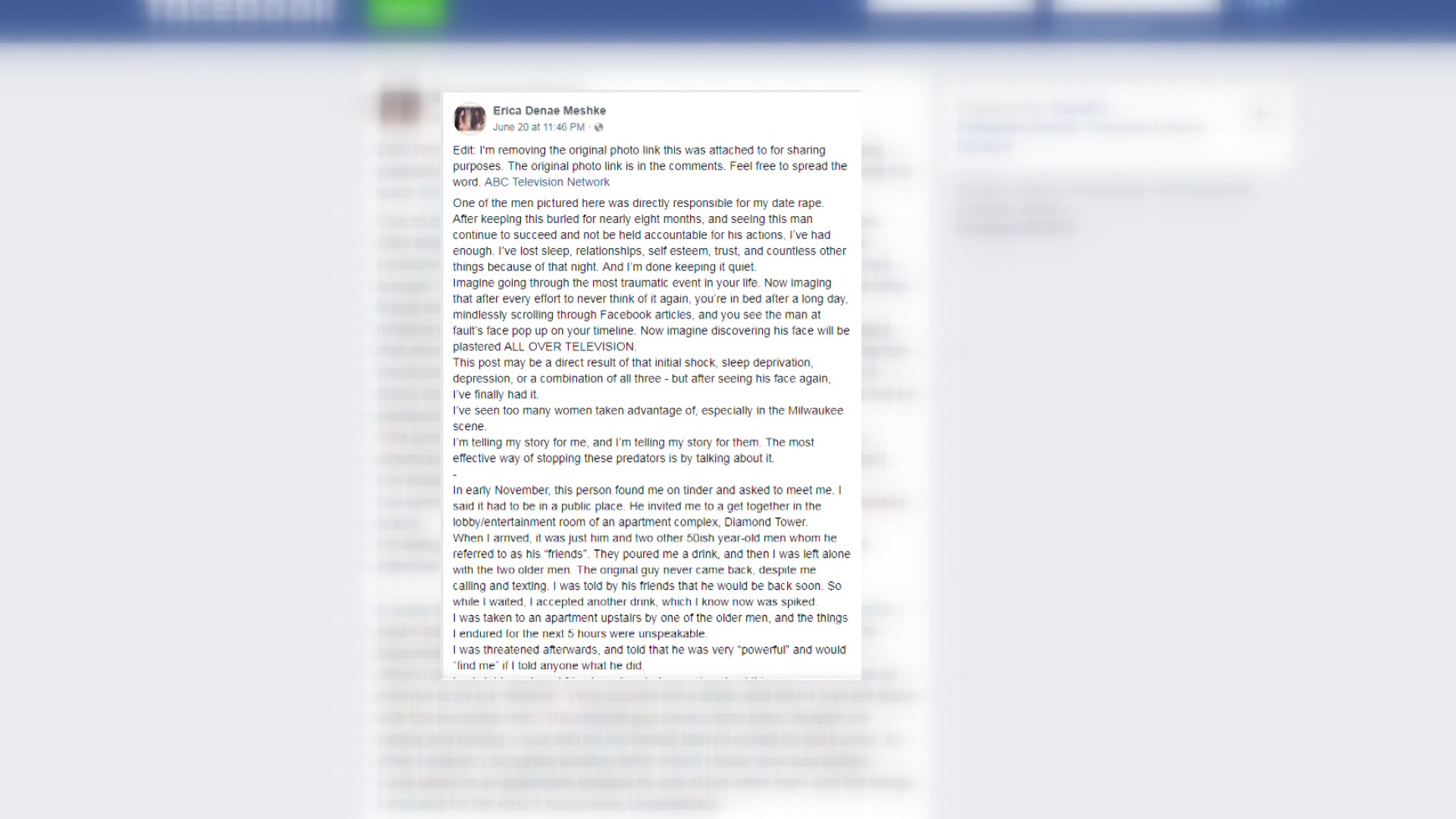 Meskhe says she met Friday on the dating app Tinder in November and they decided to meet in public at a Milwaukee apartment complex. Two men were with Friday. Menskhe says she was left with the men. She believes they gave her spiked drinks.

"I was taken to an apartment upstairs by one of the older men, and the things I endured for the next 5 hours were unspeakable,” Meshke said.

This news is shocking to one of Friday's friends who says she now wants nothing to do with him.

“When we would talk he would agree with everything I said,” Rebekah Cosgrove said. “He would mirror my energy and it made him so likable to me and it seems like he's just a master manipulator.”

Taylor Janasik says she made Friday and his friend leave her apartment two years ago when she started feeling uncomfortable. She ran into him at a bar days later.

“He said my name and I kept going and he actually grabbed me by my arm and was like ‘why did you make us leave the other night why won't you message me back?”

Margaret Teshner says she went on a date with Friday back in the fall and he made jokes that she was a "prude."

“It was a little pushy, I guess, and he was just really aggressive with putting his arm around me and stuff," Teshner said.

Teshner said Friday reached out to her on Facebook Messenger sharing his side of what happened the night of Erica's alleged assault. In his messages he says,

"I had no part in that girl's rape. Had absolutely no idea what happened until she told me at the bar months later. I invited her over. She wasn't into me at all. So I left." 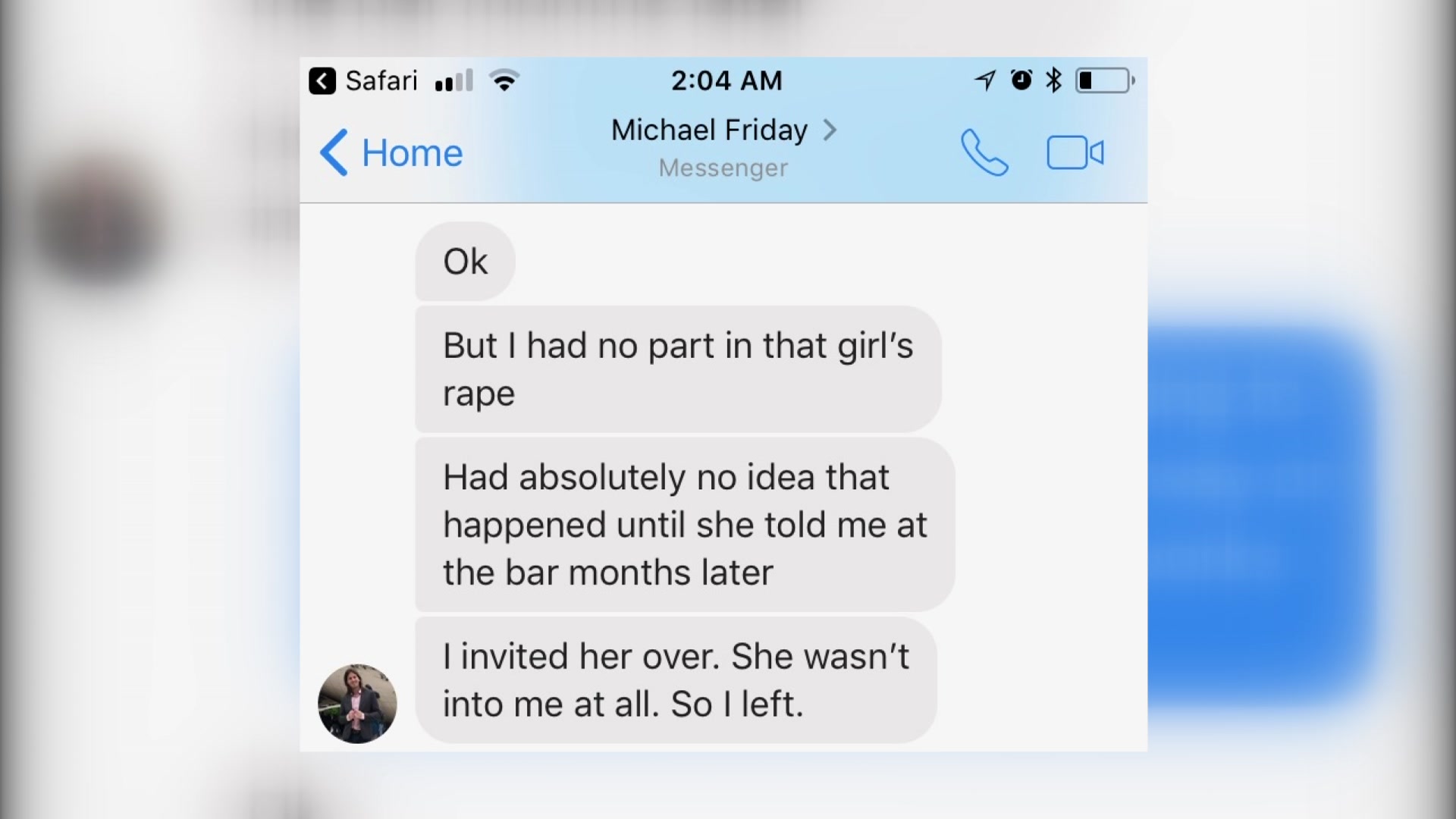 CBS 58 did try reaching out to Michael Friday and has not received a response.

A man who says he’s also a contestant on The Proposal shared this statement with CBS 58:

“As a male contestant on an upcoming episode of The Proposal, I am appalled to hear this story. I can honestly say that via a strict process of vetting and background checks, ABC’s first concern was the safety of its participants. I met the person in question and he seemed well put together, likable, and even chivalrous. It is very clear that this person unknowingly slipped through the cracks. I am saddened to hear of her story and the women now coming forward. Erica being able to tell her story is indicative of the progress we’ve made as a society making women feel more comfortable speaking out against injustices they too often encounter, but it’s very clear, after hearing these startling allegations that we have a lot more work to do, my support and thoughts are with her.”

A police report was not initially filed after Meshke’s assault. She said on Facebook now that others have come forward they plan to go to the police together to file a report. As of Friday afternoon, Milwaukee Police say no police report has been filed.