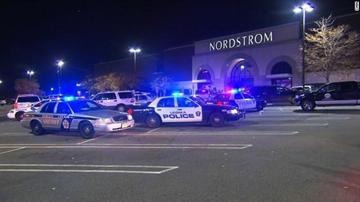 (CNN) -- Police are responding to reports of a shooter at Westfield Garden State Plaza Mall in Paramus, New Jersey.

At least one gunman is said to have fired shots at security cameras, the state police said late Monday.

\"There was just people running like crazy, so I quickly just closed my doors, ran to the back, turned off all the lights, music and everything, just to stay hidden,\" he said.

Kahmann spoke from inside the mall, one of the largest shopping centers in the New York City area.

Ally Kozic, another mall employee, said she saw \"someone dressed in all black, carrying a large gun walk past our store.\"

She said she heard loud bangs about 10 minutes before her store was set to close for the night.

There is a large police presence at the mall. There are about 20 vehicles both marked and unmarked.

Police are putting on flak jackets and bringing out assault weapons. People have been pushed away from the mall and are telling CNN that they've been told the shopping center is on lockdown.