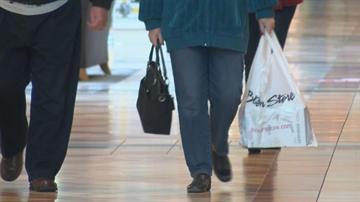 Shoppers will  start flooding malls across the country looking for holiday deals.

Mayfair Mall in Wauwatosa welcomed Santa Claus Friday and is ready for a big two months.

\"With the market trends and things that are happening,\" Vento said.  \"Our retailers are really pumped up as far as offering sales and discounts and really engaging the shopper in an experience.\"

Keeping the foot traffic up is key. A new survey shows 44 percent of Americans say problems in D.C. might push them to shop online.   Some say it's because they can find better deals.

\"We do anticipate that this holiday season our retailers will see an increase in sales over last year,\" Vento said.

The study also cited uncertainty in D.C. with debt, Obamacare's website failures, and the government shutdown as reasons people might not spend as much.

\"No. No I don't let that bother me, that doesn't make my decisions,\" Debra Watson said.

Watson says it's a good year for her.  And she has an idea for washington.

\"It's good to have a budget it keeps your spending well disciplined.\"