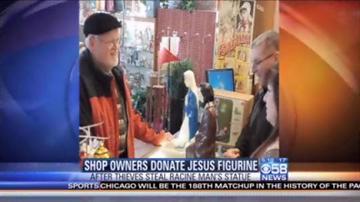 MILWAUKEE -- One day after CBS 58 shared the Grinch-like story of a Vietnam veteran having a Jesus statue stolen from his front yard, generous viewers stepped in to help.

Patrick Drier of Racine said this isn't' the first time the statue has vanished  It happened before back in 2011.

\"It really upsets me that someone would take it,\" Patrick Drier told CBS 58's Tiffany Tarpley.

This year, he thought the figurine was secure enough to keep a thief at bay.

He drilled a hole and put an eight inch spike through the cradle, but that didn't stop a Scrooge from snatching the statue again.

After seeing the story air, the owners of Antique's on Second in Milwaukee realized they had a figurine similar to the one that went missing and donated it to Drier, just in time for Christmas.