Shock and Praise for Groundbreaking Sex-Ed Textbook in China 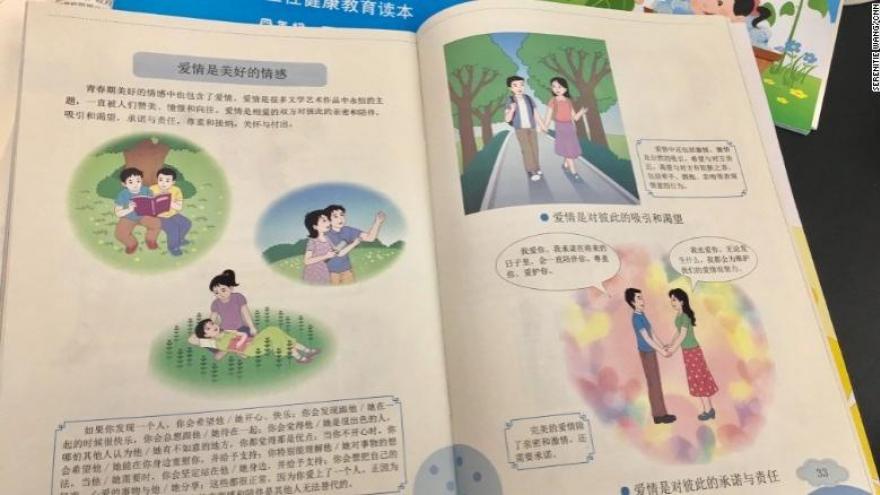 Beijing (CNN) A big step forward for a country long criticized for depriving children of necessary sex education, or graphic bordering on pornographic?

That's the question being asked in China over a series of textbooks aimed at children ages 6 to 13.

Published by Beijing Normal University, and the product of over nine years of testing, the books are currently in use in 18 elementary schools in the Chinese capital, and are being sold in bookshops.

Despite being in some schools for almost a decade, the books attracted controversy this week after a parent posted pictures from them on Weibo, China's answer to Twitter.

The user, who said she was from Hangzhou in China's southern Zhejiang province, said even she was too shy to read the content and criticized it for being too graphic and said her child's school had restricted access to the books since she complained to them.

The photos of the textbooks went viral on Weibo with comments both criticizing and defending their use.

The textbooks cover a variety of sex and relationship issues, including reproduction, sexual abuse, gender issues, homosexuality and safer sex.

While all of this may seem very normal to some readers, it's a big step forward for China, which has long been criticized for lagging behind when it comes to sex education.

Jing Jun, a professor of sociology at Beijing's Tsinghua University, told CNN last year that many of his students had not received any sex education until they entered their first year of university.

While the overall figure is fairly low compared to China's massive population, the NCHHSTP estimate the annual growth rate among young people to be 35%.

China also has a very high abortion rate, which analysts have linked to lack of knowledge about other means of contraception.

Others, including the publisher, stepped in to defend the books.

"The textbooks are rigorously designed, tested, revised and checked. We have consulted with parents, students and teachers throughout the process," Beijing Normal University said in a statement.

"The need for sex education as well as child sexual development is hugely neglected (in China), as there is a lack of sex education in both family and school."

A teacher surnamed Yu at the Xingzhi Elementary School in Beijing, who uses the textbook for her classes of 12- to 13-year-olds, told CNN they had been "very well received."

"I think the textbooks play a positive role in guiding children towards having a healthy attitude to sex," she said, though she admitted to being "slightly stunned" to find that the book stated that being homosexual was not a choice, and should not be seen as immoral.

LGBT people in China still face a great deal of stigma, and progress toward legalizing same-sex marriage has not been forthcoming.

She pointed to government guidelines calling for greater sex education, but said more needs to be done.

"We are lacking in trained teachers, dedicated class hours, and systematic textbooks," she told CNN. "This collection makes up for the textbook part."

Li praised the books for tackling same-sex relationships, saying it would help LGBT students realize they are not alone.

"Many of them are being bullied and feel suicidal," she said. "It also teaches heterosexual students to better respect and embrace others."

As for parents who felt the books were too graphic? "In a sense, parents' refusal of sex education harms their children," Li said. "Sex education matters to their life and future."