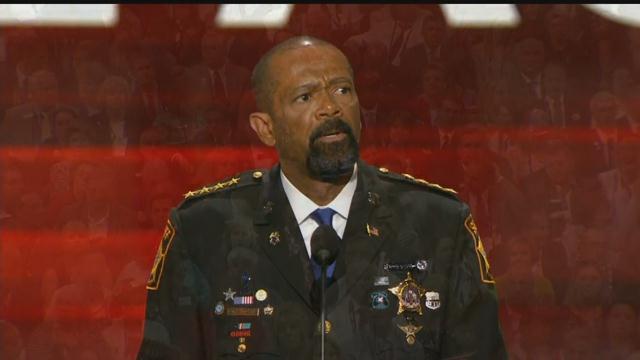 The theme of the night is "Keep America Safe Again" and Sheriff Clarke started his speech by saying blue lives matter.

Clarke talked about yesterday's killing of three officers in Baton Rouge and the killing of five officers this month in Dallas.

Clarke also went after the black lives matter movement. Here's part of what he said.

"What we witnessed in Ferguson, in Baltimore, and in Baton Rouge was a collapse of social order. So many of the actions of the Occupy movement and Black Lives Matter transcend peaceful protest, and violates the code of conduct we rely  on.  i call it anarchy.  claps.  American law enforcement officers understand that race is and has been a heated issue in our country. Most appreciate the vital need for thoroughness and transparency in pursuit of the greater good in their actions, and in their investigations" said Clarke.

Clarke said Donald trump has spoken passionately to him about the American criminal justice system.