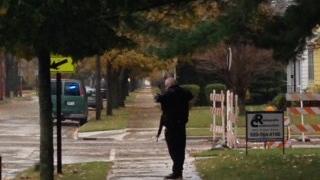 Update as of 9:11 a.m.: The Sheboygan Police Department says officers were successful in arresting a 21-year-old man that prompted an overnight standoff. Surrounding roads are open, but Farnsworth Middle School is closed for the day.

The Sheboygan Police Department is asking the public to avoid the area near Farnsworth Middle School because of an ongoing situation.

Farnsworth Middle School is closed for the day as police work to resolve the emergency.

Police say they were called to a home in the 2200 block of S. 10th Street around 8:30 p.m. November 3 by residents who said they had concerns about statements made by a 21-year-old man in the home who had access to a handgun.

When officers arrived, residents were escorted out of the home and the 21-year-old remained inside. Police set up a perimeter and began contact with the man. Attempts to end the situation were unsuccessful and Sheboygan police asked for technical assistance from the Milwaukee Police Department.

Officers are still on scene trying to make contact with the man, according to a press release from Sheboygan police. Officials say there's no immediate threat to the public, but ask residents to avoid the area until the situation is resolved.