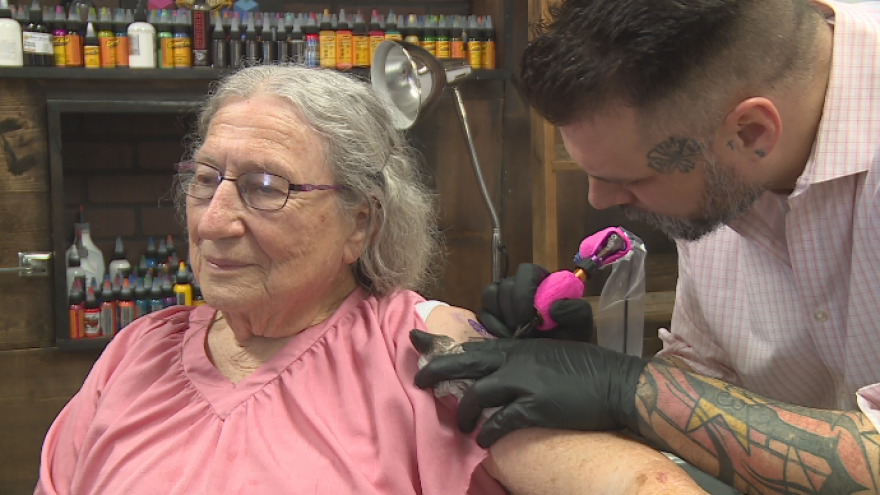 MARSHFIELD, Wis. (WSAW) -- After spending 10 years in prison, Thomas Kirschbaum changed his life, going from convict to entrepreneur. Now an owner of his own tattoo shop, Kirschbaum is quick to admit that a lot of this success comes thanks to his grandmother.

The tattoo artist has had plenty of people come through his doors looking to get new ink at Midwest Tattooers in Marshfield. But Tuesday morning, someone different than the usual clientele came in for Kirschbaum's service.

Elizabeth Kirschbaum, Thomas' grandmother, came in on her 88th birthday for her first tattoo. Thomas says she's one of the reasons he's running his very own shop in Marshfield in the first place.

"My mother abandoned me when I was 7 months old. And so my grandma raised me my whole life," Thomas explained.

Thomas also spent around 10 years behind bars, running into the law on and off again for a span of nearly two decades.

"Fighting, batteries, I do have one strong armed robbery, I stole some cars, a lot of bail jumping," Thomas said. "I forever thought that that was gonna be my life."

The entrepreneur said while behind bars, Elizabeth was always there for him.

"Cause I loved him, that's why, and he needed somebody who was there," Elizabeth explained. "My kids were growing up at the time, so I kind of adopted another one."

Thomas said his last year in prison was in 2012. That was the same year he opened his shop here in Marshfield. After five years, Elizabeth, not normally one to be drawn to ink herself, let Thomas have the honors of giving her her very first tattoo of a Butterfly.

"Very proud of him, he doesn't realize how proud we are of him, how much we love him," Elizabeth said.

"It shows to me she finally believes in what I'm doing," Thomas added.
"That she sees that I have changed my life."

From criminal to self-made man, Thomas says he's living proof that no matter the situation, it's never impossible to change your life.

"Any day you can decide 'I don't want to live like this anymore,' whatever it may be," Thomas explained. "Could be drug addiction, could be criminal activity, could be anything. You can just decide to stop that day."