Severe flooding in the Balkans sends tens of thousands fleeing 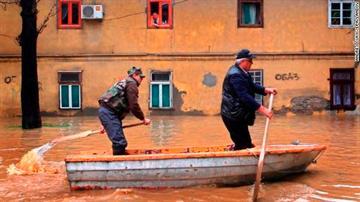 (CNN) -- Severe flooding across Serbia has prompted the evacuation of at least 24,300 people, the Red Cross said Sunday.

Dragan Radovanovic, president of the Serbian branch of the Red Cross, said the number of people affected by the high water is actually much larger. Many people stayed in the houses or apartments, one rescuer told Reuters.

\"Some people simply do not want to leave their homes,\" Novica Biorac, a volunteer from a rafting club in Raska, said. \"We are trying to convince them to leave, but it's very difficult.\"

Water in some places was chest high as rescuers shouted up to people in buildings who are stranded.

One woman lowered a bucket, and a worker put a loaf of bread in it.

\"Thank you, please come back again and also let us know what the time is. I have a clock but don't have any batteries,\" she shouted to the rescue team, according to Reuters.

Twelve bodies have been recovered in Obrenovac, about 35 kilometers (22.7 miles) from the capital of Belgrade, the Serbian government said Sunday evening. One of the twelve was someone who had already died \"of natural causes,\" Serbian Prime Minister Aleksandar Vucic said, according to a government statement.

At least 16 people are dead in Bosnia and Herzegovina, government officials there said.

The toll is likely to go even higher, officials cautioned.

One of the deceased was a rescuer, Radovanovic said, though he said he knew of five deaths in Serbia.

It's the worst flooding Serbia has seen since the country began keeping records 120 years ago, according to meteorologists.

\"The first stage of a situation like this is to save the people and evacuate those who could be killed during the floods,\" Radovanovic said. \"We luckily have nice weather (Sunday), and we will I think reach all the people who are trapped.\"

The catastrophic weather has prompted authorities to declare a state of emergency in neighboring nation Bosnia and Herzegovina, according to a government statement. Bosnian authorities say the flooded town of Maglaj received the average rainfall for two months in less than two days.

Vucic told reporters the situation in his country is \"difficult\" but that Serbia is prepared for the next wave of floods.

More rising waters are expected Sunday evening near Sabac, a city in western Serbia near the Sava River. Vucic said that Sabac is well-fortified and that authorities had done \"everything that could be done.\"

The Prime Minister pointed out that a dam 7.3 meters tall (24 feet) has been erected, but that the current level of the Sava River is over 6.3 meters -- a historic high. The river is expected to rise near Belgrade. He warned that it is difficult to predict what will happen if the river reaches 6.8 meters, or slightly more than 22 feet.

Rescuers in the hard-hit town of Obrenovac, 30 kilometers (about 19 miles) southwest of Belgrade, have recovered the first bodies of flood victims, according to Vucic. He expressed concern over how many may eventually be found once waters subside. Authorities estimate that 90% of the town has been flooded.

In Kostolac, along the Danube River, workers were building sandbag walls to protect the thermal power plant there, one the energy minister called the most important power facility in Serbia. A written statement said it produces 20% of the nation's power.

The Prime Minister thanked the many countries that have already come to Serbia's aid. He was especially grateful to members of the Russian special forces, highlighting one member who swam 200 meters (656 feet) in cold water to save several people.

Russia and Israel each announced Sunday they would send relief supplies.

According to Finance Minister Dusan Vujovic, more than 10,000 troops have already been involved in rescue and assistance operations.