Sessions Recuses Himself from Russia Investigations 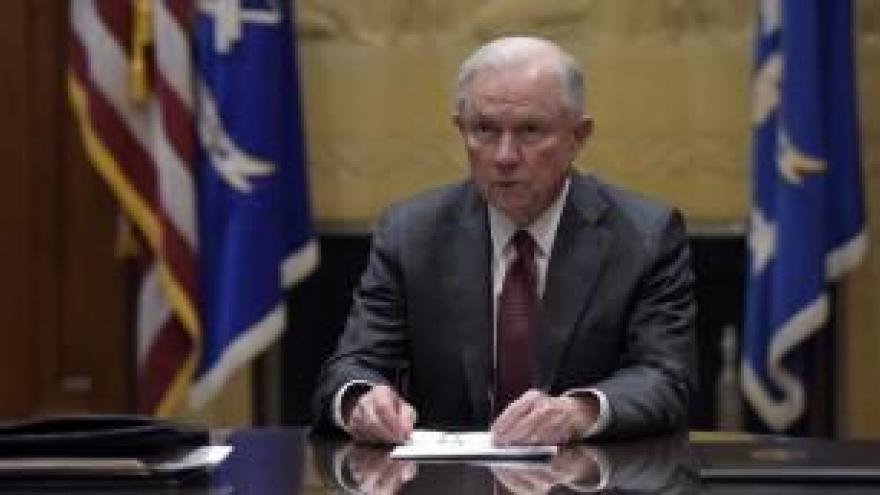 Sessions made the decision after it emerged that he had failed at his Senate confirmation hearing to disclose two pre-election meetings with Moscow's ambassador to Washington, at a time when Russia was accused of interfering in the presidential race.

"I have decided to recuse myself from any existing or future investigations of any matters related in any way to the campaigns for President of the United States," Sessions told reporters.

Pressure for Sessions to recuse himself from any involvement in a Justice Department probe into links between the Trump campaign and Moscow grew Thursday as prominent Republicans broke ranks with the administration. But shortly before Sessions' announcement, Trump backed his attorney general.

Traveling to an aircraft carrier in Virginia, Trump told reporters he had "total" confidence in Sessions. Asked if Sessions should recuse himself, the President said: "I don't think so."

Several Republicans, many of them increasingly uneasy about the implications of the evolving Russian drama, Thursday called on Sessions to recuse himself from any probe into ties between the Trump campaign and Moscow.

"Attorney General Sessions should recuse himself to ensure public confidence in the Justice Department's investigation," said Sen. Susan Collins, the Maine Republican who introduced Sessions at his confirmation hearing in January.

"I think the attorney general should further clarify his testimony. And I do think he should recuse himself," said Rep. Jason Chaffetz, the Republican chairman of the House Oversight Committee. Sen. Rob Portman of Ohio and Rep. Darrell Issa of California also called for Sessions to recuse himself.

House Speaker Paul Ryan said Sessions should recuse himself only if he was part of the focus of an ongoing probe.

"If he, himself, is the subject of an investigation, of course he would," Ryan told reporters Thursday. "But if he's not, I don't see any purpose or reason to doing this."

Democrats sense new vulnerabilities for the administration in the widening intrigue over alleged Russian interference in last year's presidential race, and called on Sessions to resign, saying he lied in his Senate confirmation hearing.

"(That) the top cop in our country lied under oath to the people is grounds for him to resign," House Minority Leader Nancy Pelosi told reporters Thursday. "He has proved that he is unqualified and unfit to serve in that position of trust."

The latest fast-moving developments dealt a fresh blow to the White House, abruptly ending Trump's victory lap after his well-received address to Congress. They underscored the difficulty the administration has had in shaking off a controversy that has already led to the firing of another Trump campaign aide appointed to a senior White House post -- former national security adviser Michael Flynn.

Sessions met on two separate occasions with Russia's ambassador to Washington, meetings the Alabama Republican did not disclose during his confirmation hearing on January 10.

At the hearing, Minnesota Democratic Sen. Al Franken asked Sessions what he would do if there was any evidence that anyone affiliated with the Trump campaign communicated with the Russian government.

"I'm not aware of any of those activities. I have been called a surrogate at a time or two in that campaign and I did not have communications with the Russians," Sessions said.

"I am going to be sending (Sessions) a letter to have him explain himself, but he made a bald statement that during the campaign he had not met with the Russians," Franken said. "That's not true."

On Twitter, Massachusetts Democratic Sen. Elizabeth Warren warned that Sessions should never have been confirmed at all, but now there is reason to remove him.

"Now Jeff Sessions is AG -- the final say on the law enforcement investigation into ties between the Trump campaign & Russia? What a farce. This is not normal," she tweeted. "This is not fake news. This is a very real & serious threat to the national security of the United States."

With Sessions' decision, oversight of any probe involving Trump's 2016 campaign would fall to acting Deputy Attorney General Dana Boente. Democrats would prefer the appointment of a special prosecutor to investigate questions about Russia but appear to lack sufficient leverage to bring about such a step.

Sessions has drawn a distinction between his role as a Trump surrogate and his duties as a senator and strongly denied ever discussing campaign-related issues with anyone from Russia.

"I never met with any Russian officials to discuss issues of the campaign," he said in a statement. "I have no idea what this allegation is about. It is false."

Sessions' spokeswoman Sarah Isgur Flores said there was nothing "misleading about his answer" to Congress because he "was asked during the hearing about communications between Russia and the Trump campaign -- not about meetings he took as a senator and a member of the Armed Services Committee."

"Last year, the senator had over 25 conversations with foreign ambassadors as a senior member of the Armed Services Committee, including the British, Korean, Japanese, Polish, Indian, Chinese, Canadian, Australian, German and Russian ambassadors," Isgur Flores said in the statement.

White House spokesman Sean Spicer said meanwhile that Sessions had nothing to apologize for, signaling an effort by the administration to stand firmly behind the Attorney General.

"There' is nothing to recuse himself (over)," Spicer told Fox News.

"He was 100% straight with the committee and I think that people who are choosing to play partisan politics with this should be ashamed of themselves."

Texas Sen Ted Cruz argued that the attacks on Sessions were politically motivated.

"Sen. Sessions' response was less than clear. It was poorly phrased. And he's acknowledged that he misspoke. But the underlying meeting was carrying out his job," Cruz told reporters.

"What we're seeing right now is a political circus."

According to the Justice Department, Sessions met with Kislyak in July on the sidelines of the Republican convention, and in September in his office when Sessions was a member of the Senate Armed Services committee. Sessions, then the junior senator from Alabama, was an early Trump backer and regular surrogate for him as a candidate.

Kislyak is considered by US intelligence to be one of Russia's top spies and spy-recruiters in Washington, according to current and former senior US government officials.

Kemlin spokesman Dmitri Peskov stated that Russia has never interfered and has no plans to ever interfere in the domestic affairs of other countries, speaking to journalists Wednesday.

When asked for reaction to the characterization of Kislyak as a spy, Peskov said "nobody has heard a single statement from US intelligence agencies' representatives regarding our ambassador. Again, these are some depersonalized assumptions of the media that are constantly trying to blow this situation out of proportion."