MILWAUKEE (CBS 58) -- A report looking at the first five months of 2022 highlights increases in crime-like homicides, non-fatal shootings and carjackings, but decreases in reckless driving as the Milwaukee Police Department continues to develop and implement strategies to address the issues which have hit record levels in recent years.

MPD Chief Jeffrey Norman and Milwaukee Mayor Cavalier Johnson announced the release of the 2022 MPD Community Report at a news conference on June 10.

The report was not released to reporters and the public until after the event.

"This is something of a comprehensive look of what the Milwaukee Police Department is doing but also with our partnerships, with our elected officials, so that people can have a one-stop shop of finding out all the different strategies," Chief Norman told reporters.

"We've got serious challenges to resolve," Mayor Johnson said. "So, let's be clear, good work is underway and the Milwaukee Police Department is a big part in that." 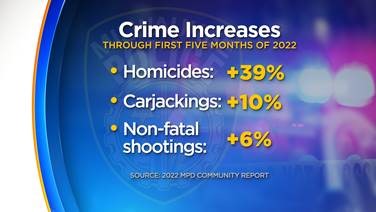 The report also lays out MPD's strategies for addressing each category.

Along with the work MPD is doing, city leaders said the community also has a role, with strategies laid out in the report.

The complete report can be seen here: