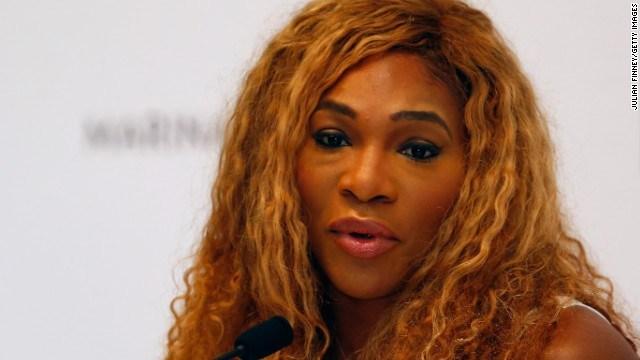 Serena Williams slammed Russian tennis chief Shamil Tarpischev for his \"insensitive, sexist and racist\" remarks in describing her and sister Venus as the \"Williams brothers\" on a late night TV chat show.

The world number one gave her first public reaction Sunday to Tarpischev's comments as she spoke to reporters on the eve of the WTA Tour Finals in Singapore.

Tarpischev, who has been banned by the WTA for a year and fined $25,000, has also made a public apology, but that has clearly not satisfied 18-time grand slam champion Williams.

\"I think the WTA did a great job of taking initiative and taking immediate action to his comments. I thought they were very insensitive and extremely sexist as well as racist at the same time,\" she said.

Williams, who won the U.S. Open title last month, added: \"I thought they were in a way bullying.

\"But the WTA and the USTA (U.S. Tennis Association) did a wonderful job of making sure that -- in this day of age, 2014 for someone with his power, it's really unacceptable to make such bullying remarks.\"

Tarpischev's apology, in which he suggested his remarks were a \"small joke,\" has also cut little ice with world number two Maria Sharapova.

She has played in Russian FedCup teams captained by Tarpischev, but had little sympathy for her compatriot when asked for her reaction to the comments.

\"I think they were very disrespectful and uncalled for, and I'm glad that many people have stood up, including the WTA,\" she said.

\"It was very inappropriate, especially in his position and all the responsibilities that he has not just in sport, but being part of the Olympic committee. It was just really irresponsible on his side.\"

The controversy has been an unwelcome distraction ahead of the prestigious end of season finals, where Williams is bidding for a third straight title.

She opens against former world number one Ana Ivanovic Monday, hoping to shrug off injury and illness scares from her two previous tournaments in China.

\"I wasn't sure if I would be able to make it to this tournament,\" she admitted.

\"But I'm here, and I'm really -- I feel better than I did obviously in China. I am just getting better every day hopefully.\"