Semi collides with home in Indiana 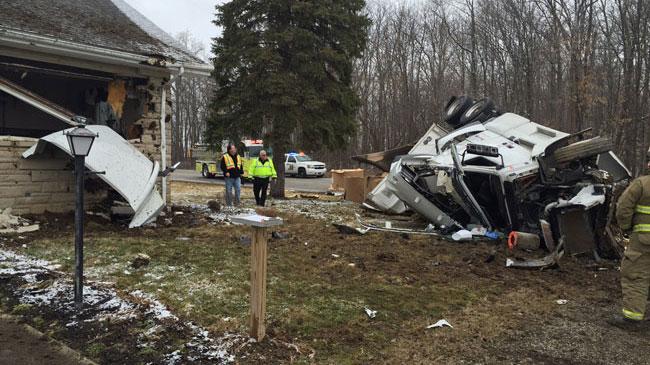 Wayne County, Indiana (ABC 57) Indiana State Police troopers were called to a residence on N. US35 around 9:45 a.m. Friday morning after a semi struck a house.

The semi, which was hauling rolls of paper, was on its side in the front yard of the residence.

Police say the semi's driver was traveling at a high rate of speed, lost control in a curve and ran off the side of the road. The semi flipped onto its side and dumped its load.

The truck rolled across the highway and the cab crashed into the house.

A mother and child were home at the time, but were not injured. The driver was taken to Reid Health in Richmond to be checked out.

The driver was ticketed for driving too fast to avoid collision, passing in violation of signs and markings.

He was also issued tickets for four federal DOT violations including driving over allowed time and log book violations.

The truck is a total loss.

US35 was shut down for several hours during the cleanup.