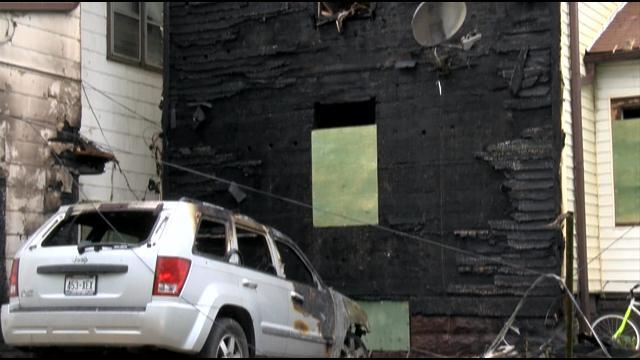 \"It really scared me, it really did,\" Rojas said through a translator.

Rojas just moved to the United States four months ago. She woke up around 3 a.m. to an explosion.

\"I left the room, ran down the stairs, but the fire was so strong I tripped and fell,\" Rojas said. \"My nephew pulled me out.\"

Crews think the fire started in a Jeep parked around back, then spread after the SUV exploded. Firefighters mainly kept the fire contained to Rojas' building, but it also damaged a home and a beauty salon next door. Everyone made it out alive.

\"What hurts the most is that we lost everything,\" Rojas said. \"That's what worries me.\"

Police say the car belonged to someone who lived in the home, but aren't sure how the fire started.

\"We were just talking about it and they believe vandalism in the back, some car, some brand new car just burned in the back and spread to the house,\" Luis Robles said. Robles' mother owns the salon next door, which had some damage but was not a total loss.

Just a few blocks away near 9th and Madison, William Rivera tells a similar story.

\"This is like a bomb fell,\" Rivera said of his charred and destroyed garage. \"Like I was attacked by a bomb or something.\"

Rivera woke early Wednesday morning to an explosion. A huge fire destroyed his garage and spread to buildings nearby.

\"Panicking,\" Rivera said of his state of mind that morning. \"Making sure everyone gets out of the home, next door neighbor, my mom's house.\"

Rivera says his neighbor's surveillance cameras captured two men pulling up in a car, lighting it on fire and running away around 4:30 a.m. Milwaukee police say that car was stolen.

Police won't say if the two fires are linked, only that they are investigating.

The Red Cross put Maria Rojas and her family up in a hotel for the next four days. After that, Rojas says she doesn't know what she'll do.