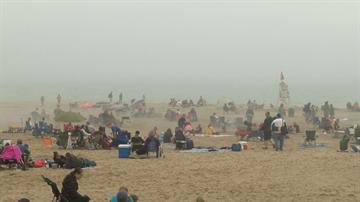 MILWAUKEE -- Sunday started with high hopes for clear skies for the second day of the Air and Water Show.  Many spectators commented, \"There's no way it can be worse than Saturday.\"  But it's as if Mother Nature took that as a challenge, producing even thicker fog.

\"Here we sit, it's deja vu all over again,\" Air Show Announcer Herb Hunter said.  \"I've  only had three complete washouts in 27 years.\"

The veteran pilot can add a fourth to that list.  Fog rolling in from Lake Michigan kept all flights grounded for a second straight day.

That ruined the Navy Blue Angels' return to the Milwaukee skies and the day for Donna Heaton and her two kids.

\"I was pretty optimistic this morning when we got here because I didn't see the fog, but now it's starting to roll in,\" Heaton said early in the afternoon.

Conditions got progressively worse as the day ticked on, locking the Heaton childrens' heads down at smart phones and crossword puzzles instead of up.

\"That's just the way the weather is and we can't do anything about the weather,\" Heaton said.

Air show officials waited as long as they could -- until 3 p.m. -- to cancel the show and said they would not  be offering refunds for anyone who bought tickets to sit up close, which was tough news for some.

The day wasn't a waste for everyone.  Patti Fluger's Country Time popcorn and lemonade stand did great business as people waited for a show that never came.

\"It's really, actually benefited us,\" Fluger said.  \"They're not sitting in their chairs.\"

But in chairs is exactly where a dejected Herb Hunter hoped people would be.

\"You don't want to do that, you don't want to break any little kids hearts,\" Hunter said.  \"But also there are legal rules and  there's safety and we gotta factor all those things in.\"

There are no plans to reschedule for this year.  Show officials say they'll work on any plans for 2015 in the coming months.