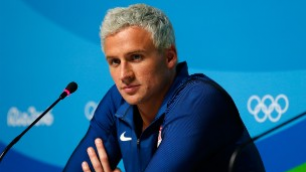 (CNN) A Brazilian judge has issued a search and seizure warrant for two of the four U.S. swimmers reportedly robbed in Rio de Janeiro early Sunday.

According to a statement by the Rio Justice tribunal, Judge Keyla Blanc De Cnop, of the Special Court of the Fan and Major Events, ordered search warrants for American swimmers Ryan Lochte and James Feigen and the seizure of their passports.

The swimmers are involved in an investigation into an alleged robbery that reportedly happened in the early hours of Sunday.

Lochte has already left Brazil and returned to the U.S., his lawyer, Jeff Ostrow, told CNN.

Police in Rio de Janeiro visited the Olympic Village on Wednesday with further questions about a report by four U.S. swimmers, including Ryan Lochte, of having been robbed at gunpoint, a spokesman for the US Olympic Committee says.

"There was no effort to detain anyone, but police did have further questions this a.m.," US Olympic Committee spokesman Patrick Sandusky said.

"It is a matter for our consulate and US Citizen Services, and we will continue to cooperate with all involved."

Lochte, Gunnar Bentz, Jack Conger and Jimmy Feigen were robbed at gunpoint early Sunday in a taxi bound for the Olympic Village by individuals posing as armed police officers, the US Olympic Committee said Sunday. The robbery -- during which one of the bandits was said to have put a gun to Lochte's forehead -- reportedly occurred after the athletes left a hospitality house hosted by France.

The committee's statement to CNN came in response to questions resulting from recent speculation about what happened around the reported robbery.

That speculation was heightened by the release of a video obtained by the Daily Mail, which it said was filmed shortly after the incident.

The video appears to show the four swimmers returning to the Olympic Village looking relatively relaxed.

The men are also in possession of high-value items that might be expected to have been taken in an armed robbery.

CNN is unable to authenticate the video.

An International Olympic Committee spokesman initially said reports of the robbery were "absolutely not true" at a press conference Sunday.

He later backtracked and apologized, saying he was relying on initial information from the US Olympic Committee that was incorrect.

Lochte has left Brazil and is back in the United States, his attorney, Jeff Ostrow, told CNN on Wednesday.

He said his client, a gold medal winner in the pool in Rio, would not turn himself in if police in Brazil issued a warrant for him.

He said Lochte had given statements on the reported robbery to the Rio tourist police, the FBI, the State Department and the USOC security team.

"We stand by what he provided in that interview and signed off on."