SCOWIS asked to rule on absentee drop boxes, unclear where GOP leader stands on the issue

MADISON, Wis. (CBS 58) -- A conservative law firm is asking the state Supreme Court to take up a case to determine the legality over absentee ballot drop boxes.

The Wisconsin Institute for Law & Liberty filed the case on behalf of two Waukesha voters Wednesday. It comes days after a state appeals court ruled ballot drop boxes can be used in February's primary election.

“Wisconsin voters, candidates, and election officials deserve certainty on the legal methods to cast an absentee ballot," said Rick Esenberg, WILL president and general counsel. "We are hopeful the Wisconsin Supreme Court will hear this urgent matter.”

The court filing marks the latest development in the legal debate over whether drop boxes can be used in future elections, as Republican lawmakers try to limit how many, and where they are placed in municipalities. 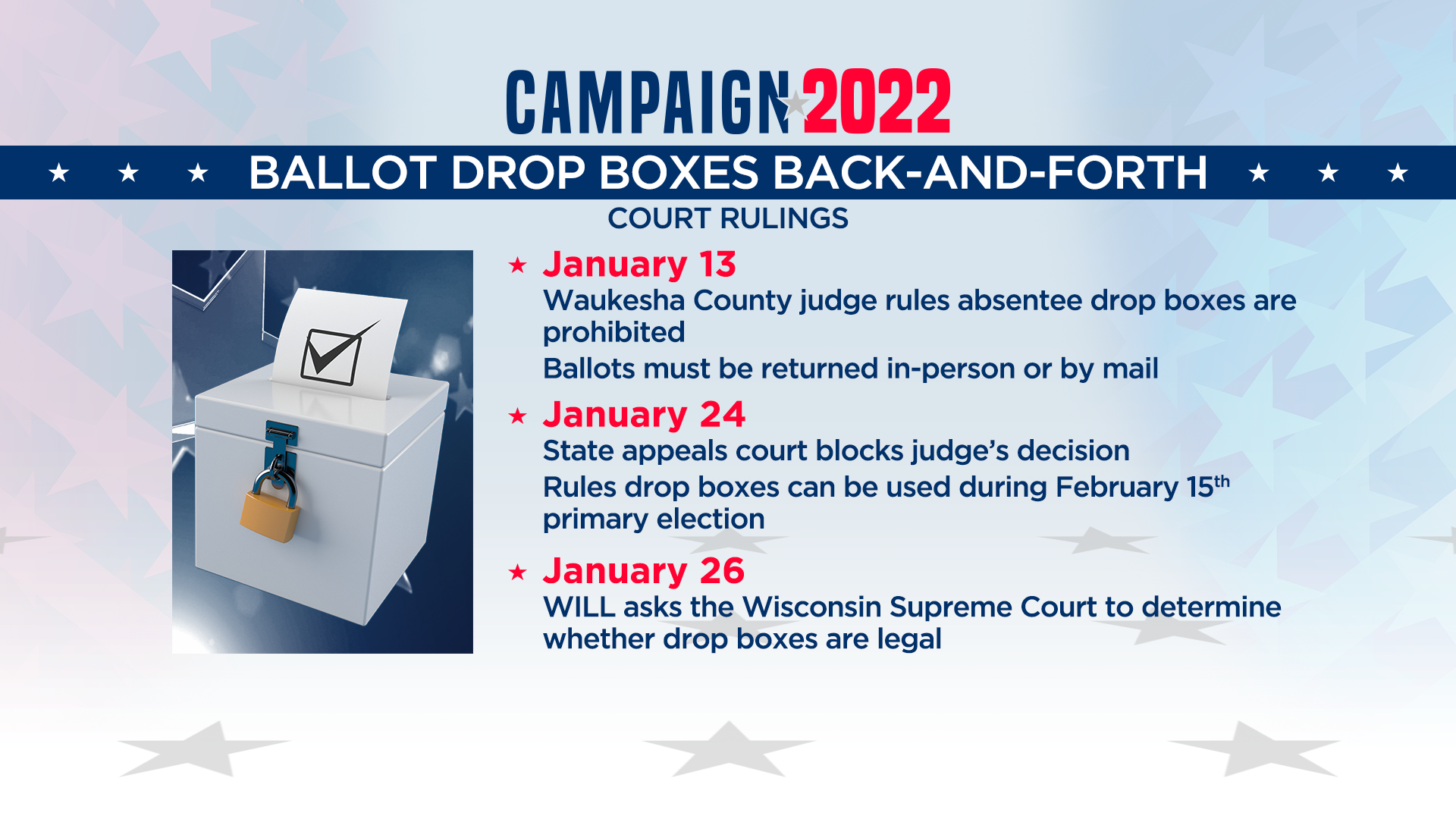 If the high court agrees to take the case, justices are likely to act quickly. They could also reject the case, ultimately leaving it up to the court of appeals to decide the fate of drop boxes.

Election clerks have rallied their support behind ballot drop boxes to give voters more options, as voting absentee continues to be popular during the pandemic. More than 500 were placed throughout the state during the 2020 presidential election.

"I have heard more and more people say they are relying on these ballot drop boxes because they go directly to the clerks," said State Sen. Melissa Agard (D-Madison).

This week, the top Republican in the Assembly dodged questions regarding whether or not he supports drop boxes after his attorney signaled some support for them in 2020.

"We wholeheartedly support voters’ use of any of these convenient, secure, and expressly authorized absentee-ballot-return methods," the 2020 letter stated.

On Monday, Assembly Speaker Robin Vos said in a statement he doesn't support an "expansion" of drop boxes, then a day later refused to answer reporters' questions if he's on board with using them in limited circumstances.

It came a day after former President Donald Trump bashed Republicans after learning of a draft GOP proposal to allow limited drop boxes in some cities.

"Some RINO Republicans in Wisconsin are working hand in hand with others to have drop boxes again placed in Wisconsin," Trump said in a statement Monday. "These fools are playing right into Democrats' hand."

The Milwaukee Journal Sentinel first reported on the bill that was being led by State Sen. Kathy Bernier, an outspoken Republican against Trump's false claims the election was stolen.

Under the bill, drop boxes would be allowed outside municipal clerk's offices and be monitored by 24-hour video surveillance. The proposal would also allow municipalities with at least 70,000 residents to place three additional drop boxes at locations that are owned by the municipality.

Bernier's office confirmed the effort is no longer on the table.

Once Trump got word of Bernier's efforts, he bashing the idea, which also prompted Vos to distance himself from the measure.

For now, it remains unclear where Vos stands on drop boxes.