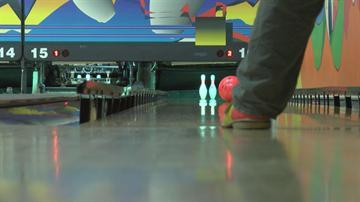 GREENFIELD -- Listening to the crash of bowling pins, Heather Sturnot watched her son have fun for what seemed like the  first time in a month Sunday.

\"We're hoping we can save a few memories and photos and stuff,\" Sturnot said.

Heather was one of 41 people who lost their home to an apartment fire near Southridge Mall on a snowy Saturday afternoon four weeks ago.

\"We didn't know how bad it was, or who was involved, anyone hurt, so it was scary,\" Sturnot said.

Everyone made it out safely, but those apartments now are boarded up and closed.  Greenfield's Edgewood Home and School Association President Tanya McGrury saw the news coverage about the fire.  She then found out five students in the  district lost their home to the fire.

\"Everybody was, 'How can i help you, let me open my pocketbook, let me give you something for the  families,'\" McGrury said.  \"It was amazing.\"

Businesses donated items and Classic Lanes on Layton offered its alley for free.  That meant all proceeds could go directly to families.

\"Every kid should have stability,\" McGrury said.  \"A place to live, a place to put their head, toys, clothes.  They should never have  to worry about stuff like this.\"

People who can't give money have donated clothes, towels and toiletries to all people affected by the fire.

\"Everybody just pulls together at a time when we need it the most,\" Sturnot said.

Online donations were close to $4,000 as of Sunday night.  If you'd like to donate, follow the link under our News Links tab.