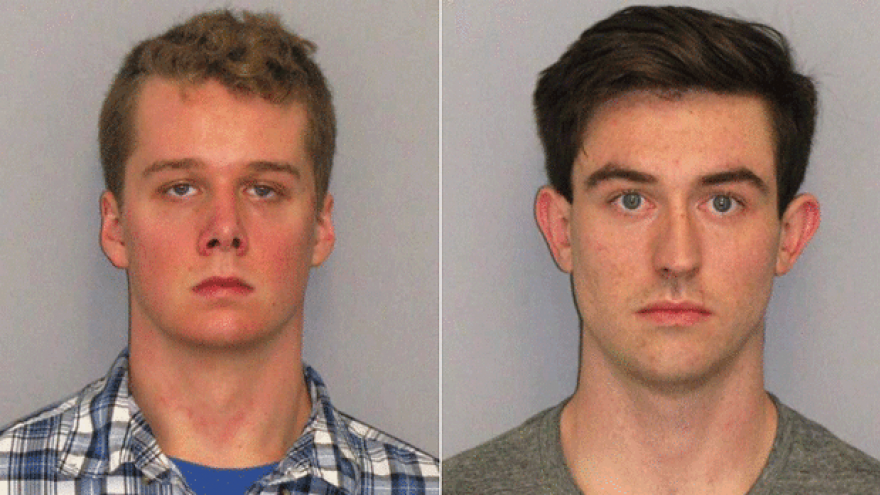 (CBS NEWS) FREEHOLD, N.J. --  A New Jersey man accused of robbing and killing a friend was caught on videotape, saying he strangled the woman with such force that he lifted her off the ground and watched for 30 minutes as she died in her home, prosecutors told a judge Tuesday.

The details in the murder case against Liam McAtasney emerged during a hearing in which a judge ruled the 19-year-old man will remain jailed until his trial for the death of 19-year-old Sarah Stern. Although her body hasn’t been found, authorities believe Stern was killed Dec. 2, the day before she was reported missing.

Prosecutors told the judge McAtasney, of Neptune City, watched the clock as Stern was dying. They said he gave the description of the killing to a friend, Preston Taylor, who secretly videotaped their meeting. Taylor also is charged in Stern’s death and a judge ruled last week that he, too, will remain in jail until his trial.

All three had been friends for years; Taylor was Stern’s junior prom date.

McAtasney’s attorney, Charles Moriarty, did not fight prosecutors’ bid to keep his client in custody, but told reporters after the hearing that McAtasney was innocent.

Moriarty suggested that Stern may have run away or committed suicide, reported CBS New York.

He addressed the recording referenced by the prosecutor but said his client and Taylor “seem to be talking like they’re going out to lunch or something. It’s like some story that they made up.”

Prosecutors allege that after McAtasney killed Stern in her Neptune City home and robbed her of thousands of dollars, he called Taylor and asked him to hide her body. Taylor, 19, hid the body behind bushes, they said, and the two men later returned and put her body in her car. They then took her car and another vehicle to a bridge and the two threw her body into the river, prosecutors said.

Both defendants were among the nearly 100 people who volunteered to help search for Stern in the area surrounding the Shark River inlet after her car was found Dec. 3, the same day she went missing.

McAtasney faces charges of murder, felony murder, conspiracy, hindering apprehension and disposal of human remains. Authorities allege Stern was killed during a robbery that McAtasney had planned for several months.

Taylor has been charged with conspiracy, hindering apprehension and disposal of human remains for his alleged role in the crime. Taylor’s attorney, John Perrone, has said that Taylor tried to talk McAtasney out of killing Stern. Prosecutors say they have no evidence of that.