Santa's on his way: Military Helps Kids Follow His Flight 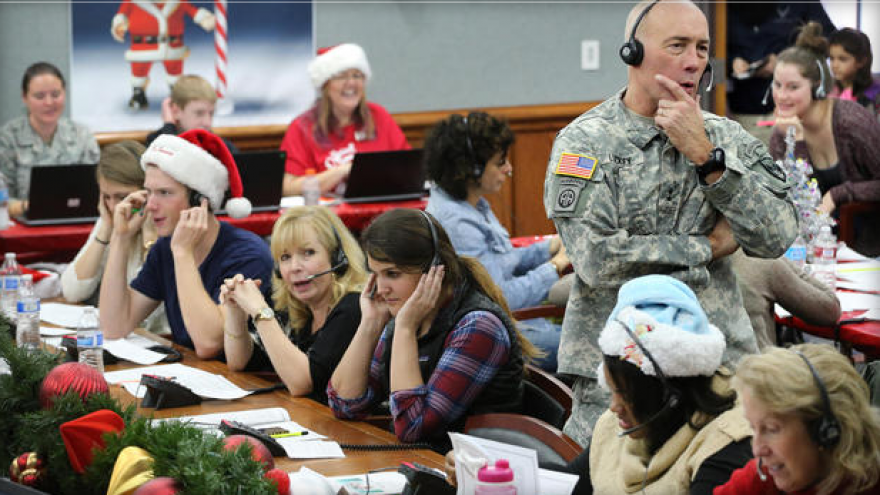 COLORADO SPRINGS, Colo. -- (CBS NEWS) Tens of thousands of children from around the world plan to call the North American Aerospace Defense Command to ask where Santa is -- and starting Saturday, they get a cheery answer about the mythical route from a real person, not a recording.

On Saturday, posts gave a heads up to cities worldwide that Santa was on his way.

Hereâ€™s a look at the Christmas tradition:

Starting at 4 a.m. MST Christmas Eve, children can call a toll-free number, 877-446-6723 (877-Hi-NORAD) or email noradtracksantaoutlook.com to ask where Santa is on his fabled journey.

Volunteers sit elbow-to-elbow in conference rooms at Peterson Air Force Base, NORADâ€™s home, answering phones and checking computer-generated maps projected onto big screens. First lady Michelle Obama traditionally answers calls via a remote hookup, but Noel said it was not yet known if she will participate again this year.

Why does NORAD â€œtrackâ€ Santa?

It started in 1955 when a Colorado Springs newspaper ad invited children to call Santa Claus but accidentally listed the number for the hotline at the Continental Air Defense Command, NORADâ€™s predecessor.

Air Force Col. Harry Shoup took a call from a child and thought he was being pranked. When he figured out he was talking to a little boy, he pretended he was Santa.

More children called, and Shoup instructed airmen to play along.

Itâ€™s now a tradition, beloved by kids and the military. Volunteers range from generals and admirals to enlisted men and women, who sometimes report for telephone duty in military uniform and a Santa hat.

The North American Aerospace Defense Command is a joint U.S.-Canada operation that defends the sky over both nations and monitors sea approaches. Itâ€™s best known for its Cold War-era control room deep inside Cheyenne Mountain - now used only as a backup - and for NORAD Tracks Santa.

Â© 2016 CBS Interactive Inc. All Rights Reserved. This material may not be published, broadcast, rewritten, or redistributed. The Associated Press contributed to this report.