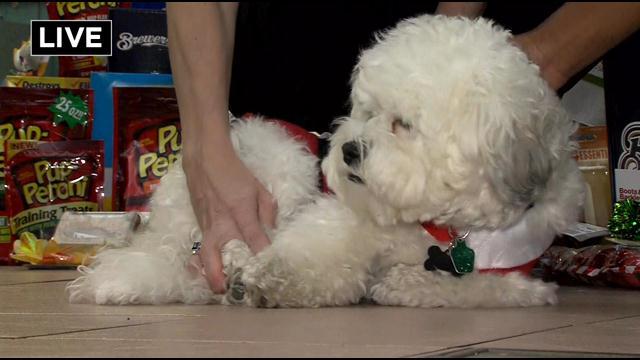 A former stray turned star is giving animals in need hope that they too can find a forever home.

Hank, the Ballpark Pup, traded in his baseball jersey for a Santa suit Thursday morning. He stopped by the Wisconsin Humane Society to deliver toys and treats to the shelter's homeless cats and dogs.

Since the Brewers adopted Hank, the organization says it has attracted more people to the stadium and influenced others to take an interest in the sport. But most importantly, team leaders say it's been rewarding to help increase awareness about animals in need.

The Brewers and the Brewers Community Foundation have sold thousands of items in Hank merchandise this year, 20 percent of which benefits the Wisconsin Humane Society. So far, the Hank fund has raised more than $150,000. Humane Society leaders say that money supports the cats and dogs in their care and has also allowed them to start new projects.

Just in time for the holidays, there are new Hank items on sale. They include a Christmas sweater, stuffed \"Hanks\", pet clothing and a children's book. One specialty item is a Hank ornament, but the only way to get it is by purchasing two of the Brewers \"Holiday 4-Packs.\"

CBS 58's Marshanna Hester caught up with Hank's mom, Marti Wronski, to find out how Hank has progressed and what he'll do for his first Christmas in Milwaukee.

To learn more about animals up for adoption, contact the Wisconsin Humane Society.