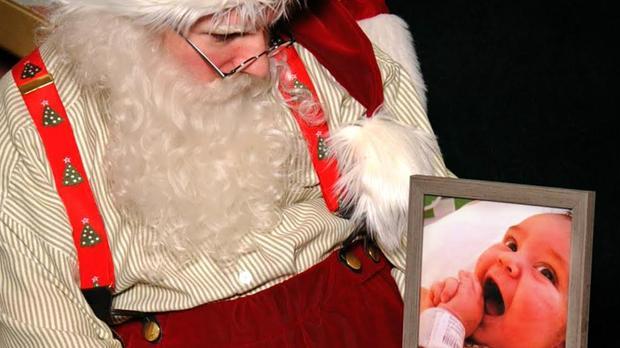 From an adult jokingly asking for a Corvette to a wheelchair-bound man requesting new legs -- the 22-year-old actor, who has been wearing red velvet Santa suits since he was 3, has heard it all.

Then he met Kyle Daniel.

Holding a square picture frame in his arms, Daniel quietly made his way to the front of the line to meet Santa at his local mall in Statham, Georgia.

"I have a request," Daniel said, turning around the frame that held a photograph of a smiling baby. "My son passed away, last year."

Without another word, Sigmon filled the silence that surrounded them: "Absolutely."

Taking the frame from the father, Sigmon placed it on his knee.

"I didn't ask any questions, but I am guessing that this is his first photo with Santa," wrote Sigmon, recounting the story on his Facebook page last week. "The camera snap was the only sound I could hear through the entire mall."

"Hayden passed away before he got to meet Santa," Daniel wrote on a Facebook page that honors his son.

"We wanted to have a photo with Santa," Daniel told CBS News. "Even though Hayden wasn't here, I just figured I'd take a photo of him to Santa."

When Sigmon was finished posing for photos, Daniel walked over to a screen to choose the picture that he would give to his wife as a present.

That's the one," he pointed.

As he pulled out his wallet to pay for the print, a woman at the desk stopped him. The workers told Daniel the holiday package was their gift to him.

With tears welling up in his eyes, Daniel gave Sigmon a hug.

"It is definitely one of my most memorable experiences in the big chair," Sigmon told CBS News. "I will remember it for as long as I live."

When Daniel decided to get the photo taken, he had "all types of emotions," but he quickly found comfort in Sigmon's calm demeanor.

"[Sigmon] made a hard situation so easy for me," Daniel said. "I couldn't have asked for a better person to have been there that day."

As Sigmon watched Daniel leave, he saw another family waiting to visit.

"I took a deep breath, and jumped into my normal, jolly welcome," Sigmon said, describing how that's part of the job.

After waving goodbye to the group, he took a break with his wife -- and costume designer -- to "feed the reindeer."

"We both sat in our little back room and cried," Sigmon said. "We held each other's hand and prayed for that family, together."

More than 50,000 people have shared Sigmon's story on Facebook and dozens of parents who have faced a similar loss have commented on the post.

"I know exactly how that man feels," one user commented. "The holiday time in general can be really tough for anyone who has lost a loved one."

As an actor, Sigmon says he wears a lot of hats throughout they year; but working as a Santa is one of the most rewarding jobs he's ever had, especially when he gets to share stories like Daniel's.

"It's an important reminder for us all that Christmastime is unbelievably hard for some families," he said. "Pray for the brokenhearted. Smile at people. Just be kind. Love one another."

Daniel agreed with Sigmon's advice: "Just be kind to people, especially during the holidays."