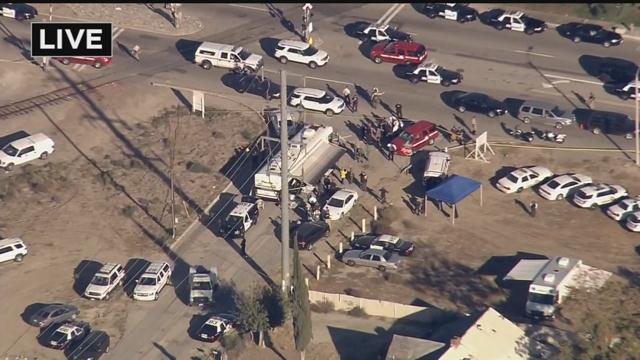 Malik's post was made on an account with a different name, one U.S. official said. The officials did not explain how they knew Malik made the post.

A law enforcement official said it appeared that Wednesday's attack -- which left 14 people dead and 21 wounded before the two attackers, Malik and her husband, Syed Rizwan Farook, were killed in a shootout with police -- may have been inspired by ISIS. But none of the officials said that ISIS directed or ordered the attack.

"This is looking more and more like self-radicalization," a law enforcement official said.

Another official said authorities haven't ruled out that others may have influenced this radical view. In addition, the law enforcement source said investigators have a greater focus on whether the shooting occurred after a workplace issue with religion.

A lawyer for Farook's husband has said relatives have no idea why the couple burst into the holiday luncheon for Farook's co-workers and viciously opened fire. Nor did they have an idea the couple had a makeshift bomb lab in the apartment they shared with their 6-month-old daughter and Farook's mother. Nor did they know that either of them had become radicalized, as law enforcement officials have said.

"It just doesn't make sense for these two to be able to act like some kind of Bonnie and Clyde or something," Farook family attorney David S. Chesley told CNN's Chris Cuomo. "It's just ridiculous. It doesn't add up."

Farook occasionally went alone to shooting ranges, and he bought significant amounts of ammunition. But Chesley and fellow family lawyer Mohammad Abuershaid insisted those aren't red flags, nor are Farook's trips to Saudi Arabia -- first in 2013 for the Hajj, the annual pilgrimage to Mecca that Muslims are required to take at least once in their lifetime, then again to marry Malik, whom he'd met through an online dating service.

Farook and Malik "kept to themselves," Abuershaid said. But the interactions they did have didn't hint at any significant changes in their thinking or demeanor, any turn to Islamist extremism, or any sign they were plotting a mass killing, the lawyer said.

"There was nothing to show that (Malik) was extreme at all," Abuershaid said. "(And Farook) was a normal guy, in every sense of the word."

It's not that the family denies the couple carried out this massacre. They are shocked by it. And they're also "very remorseful and they're very sad."

But that doesn't mean they can explain it. And the shooters didn't make it easy for authorities either, given that the hard drive from their computer is gone, and two relatively new cell phones were found smashed in a garbage can near one of the crime scenes, law enforcement officials said.

So far, officials have speculated that Farook's apparent radicalization may have been part of the reason. Part of it may have stemmed from workplace tensions. But they have declined to label this a terrorist attack.

"It would be irresponsible and premature for me to call this terrorism," FBI official David Bowdich said Thursday. "The FBI defines terrorism very specifically, and that is the big question for us: What is the motivation for this?"