Ruck March in Milwaukee May 23rd to fight veteran suicide 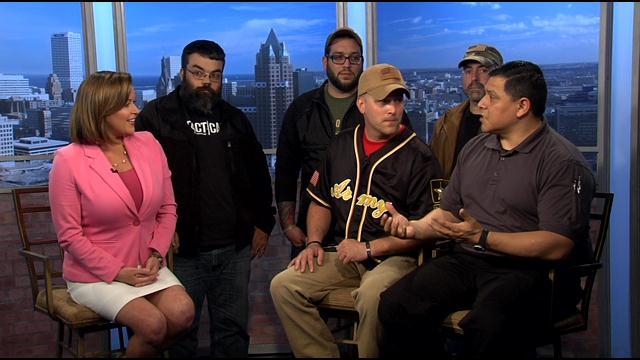 It's alarming just how many military veterans are committing suicide; 22 or 23 a day according to the most recent statistics.

A group of local military veterans just couldn't stand by and do nothing so they're organizing a \"Ruck March\" May 23rd in Milwaukee.

A ruck refers to a military grade backpack.

Other military are invited to form teams and take part in the 12 mile hike which will start at the lakefront near the Prospect Bridge around 8 a.m. and ends at the Dryhootch Coffee shop along Brady Street.

Members of the public are also invited to take part, either march or just cheer on those who do decide to give it a go.

They're also looking for people who would be willing to provide transportation to those who can't complete the march or distribute water along the route.

The CBS 58 News at 4:30 p.m. seeks to bring attention to grass roots efforts to make our community a better place and give extra time to important issues.

CBS 58's Michele McCormack spoke live with the organizers of the local Milwaukee Ruck March. They were  Dallas Crawford and Herb Raasch and George Pinchuck (ret) of the U.S. Army, Ken Stark of the U.S. Navy and Juan Herrejon of the U.S. Marine Corps.

They will be in full combat dress with the exception of their weapons. You can dress in casual work out wear if you feel more comfortable. The important thing is to get any many people as possible talking about the stresses of returning veterans from all conflicts and making them feel supported.

The veterans say Dryhootch has been a valuable partner, offering military members a place to talk without having to go through a formal medical center. The informal atmosphere might make those who are reluctant to admit they're having trouble more likely to come forward and get some help.

And enjoy the clip of Michele giving the ruck a try!