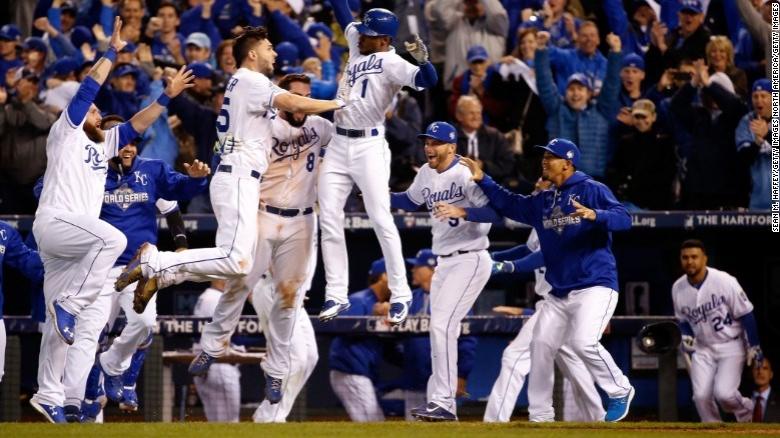 (CNN)An inside-the-park homer. Power outages. Oh, and extra innings. Looks like the 2016 World Series is off to a dynamic start.

The Kansas City Royals beat the New York Mets 5-4 in the 14th inning early Wednesday morning to claim the first game of the series. It was the longest Game 1 in World Series history.

It was a wild and wacky game from the start. How wild? How about an inside-the-park home run to start things off? Escobar -- yep, the same guy who scored at the end -- smashed the first pitch of the series into center field and quickly sprinted around the bases to give Kansas City a stunning, early 1-0 lead. MLB.com said it was the first inside homer in a World Series since 1929.Things got wacky later when the game was briefly delayed after the Fox Sports broadcast lost power due to a problem with generators. Fox said during the fourth inning "a rare electronics failure caused both the primary and backup generators inside the Fox Sports production compound to lose power."

The Mets and Royals were tied 1-1 in the bottom of the fourth inning when the technical issues occurred. The game was delayed about six minutes.

According to USA Today Major League Baseball columnist Bob Nightengale, Mets pitcher Matt Harvey was "standing on the mound with no one to pitch to now."Major league teams often use the television broadcast to watch for close calls by umpires they may want to challenge.

"The on-field delay was due to replay capability being lost in both team's clubhouses," Fox said.

For about 20 minutes, Fox used the MLB Network's international feed and announcers. That broadcast used a different generator, Fox said.Power wasn't the snafu during the game. In Kansas City, Google Fiber experienced about an hour-long outage during the early innings, enraging Royals fans watching the game and causing the tech giant to tweet out a quick apology.

"We're so sorry about the outage in KC," Google said. "We know it couldn't have happened at a worse time, and we're working as quickly as we can to fix it."Courtney Hughley, a spokeswoman for Kansas City Power and Light, said there were no issues on their end.It is not the first time a major U.S. sporting event has been delayed because of a power problem.

Super Bowl XLVII in 2013 was stopped in the third quarter when a newly installed electrical relay device meant to protect equipment triggered unexpectedly, causing another device to stop supplying power to part of the Superdome. The Baltimore Ravens held off the San Francisco 49ers 34-31 after the 35-minute delay.The game also featured a poignant angle. The father of Royals pitcher Edinson Volquez died hours before the game started, MLB.com reported. Volquez pitched for six innings and wasn't aware of his father's death until after he finished pitching.

Buck, during the broadcast, explained why Volquez wasn't immediately told of his father's death and why Fox didn't say anything about it until late in the game.

"It was his wife's wish that he not be told before or during the start," Buck said. "So with respect to that, we kept that news quiet until he came out of the game."