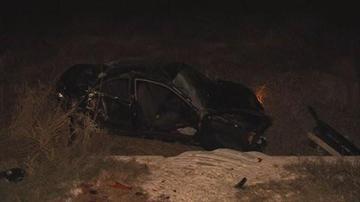 SHEBOYGAN COUNTY --  One person is dead and two others are hurt after a rollover crash in the Town of Mosel early Friday morning.

The Sheboygan County Sherriff's Department said the vehicle was speeding south on County Road LS near Rowe Road shortly after 2:00 a.m. before touching the shoulder and rolling over numerous times. At one point, the car hit a ditch and rolled over again.