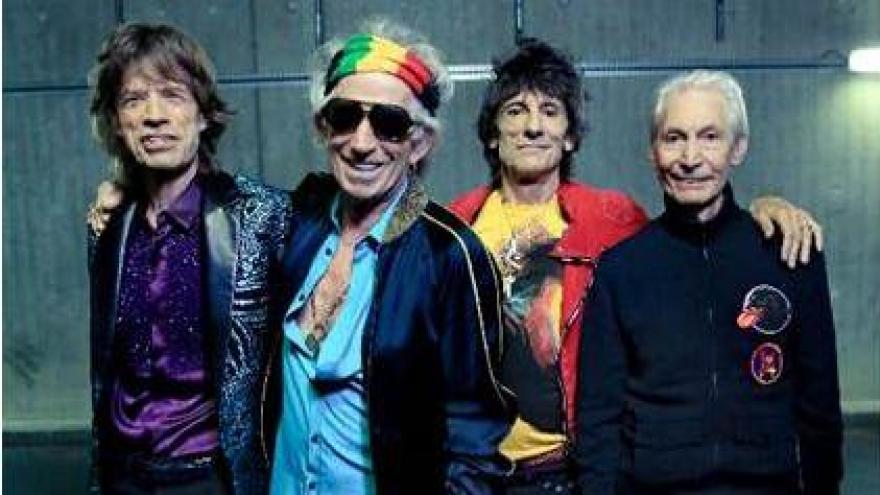 CHICAGO (CBS) — When you walk into the new 18,000 square foot Rolling Stones exhibit, you’re greeted by a giant video wall with music, historical film, videos and photos of an iconic band who’s work has spanned more than 50 years.

“The band’s been around for 54 years and they’ve had a huge impact on popular culture in many areas,” said Ileen Gallagher, the Curator of Exhibitionism.

It’s the largest touring exhibit of its kind and features more than 500 rare items covering the band’s influence on fashion, film, recording, art and design.

“There are 65 costumes designed by everyone from Ossie Clark to Tommy Nutter, to Alexander McQueen to L’Wren Scott to Versace,” she said.

And when you’ve been around for more than half a century, there’s plenty to share.

“There’s art and design, posters, album cover art that was designed by Andy Warhol. We have a documentary that’s narrated by Martin Scorcese, who takes you on a little tour of the Rolling Stones on film, stage and set design. We have models of some of the most important stages they’ve created.”

Gallagher says working with Mick Jagger, Keith Richards, Bill Wyman and Charlie Watts was the thrill of her life. It’s the first time in history the band has unlocked their vast private archive.

“They were great partners — they were very generous, they were really funny, they don’t take themselves too seriously. They really helped us push the creative envelope.”

Exhibitionism gives visitors a look back into the early days. There’s even a recreation of the Edith Grove flat that Mick, Keith and Brian shared in London in 1962.

“There were no pictures of it, so I interviewed the band members who lived there and they kind of related the experience to me so we worked with really talented designers to recreate it,” she added. There is also a recreation of a Stones’ recording studio complete with their original instruments.

“It’s evocative of Olympic studio. We have all the original instruments from Olympic. We even have a projection of the band at Olympic studios.”

“The first time I ever met Keith, I was hired by the Sun-Times to go to New York and do a photo shoot with him,” said Paul Natkin, a Chicago photographer.

Natkin photographed the Stones in the early days and, in 1989, began as the band’s tour photographer.

“Those pictures flashing on the screen. Every once in awhile I see one of my pictures on the screen and I say, ‘hey, I took that picture.’ It’s kinda cool. It’s really exciting,” he said.

Natkin has his own exhibit on the first floor of Navy Pier that features 30 of his favorite photos of the band.

“They’re great showmen and they’re great musicians and they combine the two perfectly. Hopefully younger people will come and see how cool they are,” said Natkin.

Gallagher says the die hard fans will love it. But it will also appeal to those interested in popular culture and music history.

“They were the first to perform in Prague at the fall of the Iron Curtain invited by the President, the end of the summer of love, they were part of that. There are so many examples,” said Gallagher.

Exhibitionism first opened in London, then moved to New York. Gallagher says it’s making a stop in Chicago because the city was an important place for the Stones.

“They came here on their first tour of America and they recorded in Chess Studios. Chess Records was so seminal and so important to them that it was a dream come true when the first time they were in America they got to record at Chess,” said Gallagher.

“Chicago is the home of the blues and the Stones are a band because of the blues, so the fact that it’s here, it’s the way it should be,” said Natkin.

Gallagher says Exhibitionism is a testament to the longevity of the Rolling Stones. A body of work that spans a generation.

“One of the reasons we didn’t organize this exhibit chronologically is because there is no end, you know, they say there is no end so they’re just going to keep going until they can’t go anymore,” she said.

The retrospective is the largest touring exhibit of its kind and will be at Navy Pier through July 30th.

Tickets range from $32-$35 for adults, $25-$27 for students/seniors (65+)/military and $20-$22 for juniors (ages 6-16). VIP tickets are available for $80, which includes entry to the exhibition on two separate days. Group tickets for 10 or more are available by calling Broadway In Chicago Group Sales.