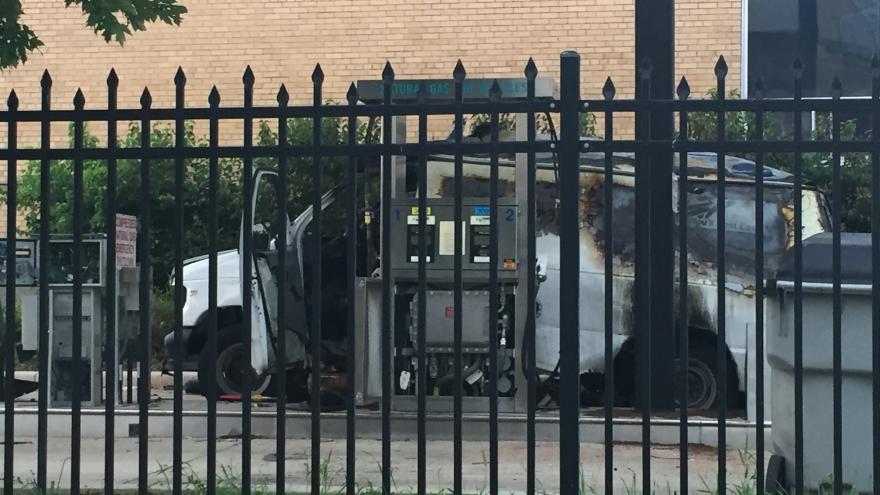 UPDATE: Lincoln Ave. has reopened to traffic in both direction near 39th St. shortly after midnight. The incident reamins under investigation.

Milwaukee police arent allowing anyone to get within 300 yards of the the natural gas pump at the Department of Public Works (DPW) where one of several tanks there blew up.

Tuesday evening CBS 58 crews heard three loud booms and saw fire come out of the spot where you see those emergency crews.

They doused water on the area very quickly - crews on scene tell us they are forcing the damaged tanks that are there to blow up - so they can contain the explosion and keep people safe.

A spark ignited where this now crumpled white van sits - caused an explosion that rocked businesses and homes around Lincoln Avenue.

"I was in here working and all of a sudden boom you could feel it hit your chest," says Casey who works across the street.

Alyssa Schnoebelen says, "I popped outside to look and saw a lot of people running toward the gas station."

"Ran outside saw somebody crawl into the bushes so we ran back in and called 911," says David Lau .

Milwaukee police say two men were seriously injured in the explosion but won't confirm what happened. .

However we talked exclusively to a DPW worker who lives just two blocks away - and used to work at this same sanitation yard. He says - he knows what happened.

"We heard that they were smoking as they were pumping their gas. And they got their legs blown off," says the worker.We asked Milwaukee Fire Officials who say they can't confirm that information as of Tuesday evening.

Fire, police and DPW crews - focused on keeping everyone 300 yards away.

They say one tank already blew. There are two more - and they're trying take pressure off of them - so this spot doesn't go up in flames again.

A DPW worker on scene said the two men did not work for this sanitation yard and believed that they were just citizens getting gas.. Milwaukee police nor DPW will confirm that. As for the streets being blocked off Lincoln is blocked off between Miller Park Way and 35th Street.